"If we ignore the underlying politics of the show, Waitress smells like a sweet success"

Sara Bareilles’ musical Waitress, transferring after Broadway success, is a sweet slice of beautiful harmonies and a celebration of female friendship.

Based on the late Adrienne Shelly’s 2007 film, the musical follows Jenna (Katharine McPhee), a waitress and piemaker in an abusive relationship with husband Earl (Peter Hannah). Jenna creates pies with strange names mirroring her personal life – think ‘Deep (Shit) Dish Blueberry Pie’ - and dreams of running away. After unexpectedly falling pregnant, she begins an affair with her gynaecologist Dr. Pommater (David Hunter).

Waitress is a quiet show, more of a character study than a musical which pulls out glitzy dance routines. Scott Pask’s pastel-coloured set doesn’t fill out the entire stage, instead squeezing the action into the centre, and some of Sara Bareilles’ songs are unfortunately forgettable, while Ogie’s ditty ‘I Love You Like a Table’ is just simply confusing. However, ‘She Used to be Mine’, ‘It Only Takes a Taste’, and ‘Bad Idea’ are notable exceptions. 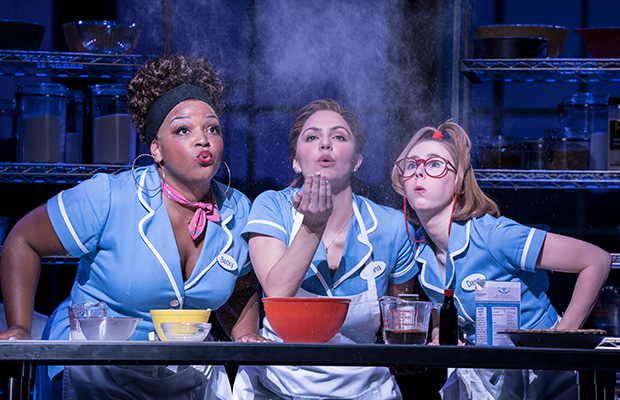 Katharine McPhee, reprising the role of Jenna, is simply wonderful. She balances Jenna’s sassier nature alongside her softer vocals, creating a well-rounded character we side with. David Hunter’s unfaithful doctor is a good counterpart, all gangly arms and quirky vulnerability. As Jenna’s best friends Dawn and Becky, Laura Baldwin and Marisha Wallace are excellent companions, with Baldwin’s solo ‘When He Sees Me’ bringing down the house.

Waitress is most certainly a show which celebrates female friendship and success. Alongside the female-led creative team (not ‘all-female’ as the marketing suggests, sadly), we are given a story in which female sexuality is displayed and celebrated. ‘Bad Idea (Reprise)’ sees the three women enjoying sex, eliciting raucous applause and cheers from the audience. And, concluding the story, we see Jenna as a successful single mother, surrounded by the women who have helped her grow.

Unfortunately, there is a bitter aftertaste if you think too hard about the sexual politics of the show. While women are celebrated, it’s unclear what we are supposed to think of the men. Of course, Earl is abusive and is the bad figure, but what of Ogie, the nerdy guy who falls for Dawn, stalking her at work and not taking no for an answer? What of Dr. Pommater, conducting an affair with his (pregnant) patient whilst married himself? Is Jenna’s new life mainly due to an old man giving her money? It’s an interesting one to think about.

Overall, Waitress is a charming musical full of major comedic moments and a killer show for women. If we ignore the underlying politics of the show, then Waitress certainly smells of sweet success.