Prithee, reader. Let not your Mondays pass in dreary needlework. Make haste to Fortune Theatre, where an as yet unknown Jane Austen novel shall be performed for your pleasure. Like a line of eligible bachelors, no two shows are ever the same, thanks to the formidable talents of the improv group onstage.

On this particular visit, the unearthed Austen novel ‘Maid in Chelsea; Strumpet in Brixton’ (suggested by an audience member in possession of singular wit) is the focus of the show. Past titles span ‘Bath to the Future’, ‘Mansfield Shark’ and ‘Strictly Come Darcy’. The story drifts between the hellish wasteland of Slough, the weed-fragrant nooks of Electric Avenue and the latte hotspots of the King's Road. ‘Tis a story which lampoons reality TV stars and includes a dash of beatbox musical, all while delivering a coherent tale of young love. 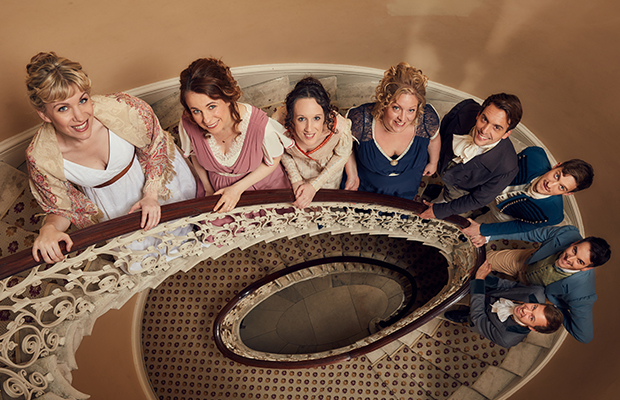 Verily, the ensemble is a talented one. Charlotte Gittins expresses her Austen-isms with breathless perfection, and her off-the-cuff ode to Brixton (“why is your harbour so cold? What, pray, is a camber well?”) is a triumph. As sure as lambs frolic in spring, Cariad Lloyd holds the show together with her expert timing and feel for narrative.

The most amiable Miss Rachel Paris is all innocence and earnestness as a young woman torn between suitors. One cannot fail to collapse in mirth at Graham Dickson’s awkward silliness, as he plays the twin roles of floppy American producer with breeches made of oil, and goodhearted Greggs employee Mr Somers. Amy Cooke-Hodgson is quick-witted and winsome; Joseph Morpurgo has a brilliant sense of mischief.*

The group is accompanied throughout by Alex Judd on the violin, a most accomplished gentleman indeed.

Austentatious: An Improvised Jane Austen Novel hasn’t quite achieved perfection: it lacks the added impressiveness of the impromptu musical numbers of Showstopper! The Improvised Musical and it’s a shame that audience suggestions only make up the very start. For all that, the result is a show that’s brilliantly silly, well-executed and frequently hilarious. It is a truth universally acknowledged that everybody should go see it.

*The photo also pictures Daniel Nils Roberts and Andrew Hunter Murray, who are part of the Austentatious improv group but were not performing on press night.