A sparklingly contemporary refresh of this iconic musical

Bobbie’s turning 35 and she’s at that stage in her life where all her friends are married, or about to get married, so she must be getting ready to settle down herself right? Right?! That’s the basic premise of Stephen Sondheim’s musical Company and even though it was written nearly 50 years ago, it remains just as relevant today in the way that society expects everyone to conform to the norm. That resonance comes from the quality of George Furth’s book but also from the insightful production that it receives here from Marianne Elliott.

For if you’re not familiar with the musical, Elliott has made some quite radical changes. She’s swapped the gender of the main character so that Bobby has become Bobbie (for whom is society harshest on but women?), she’s rejigged some of the supporting characters to bring its gender politics up to date, and she’s introduced gay marriage into the equation since that is legal now. The result is a sparklingly contemporary refresh of this iconic musical which is a huge success and a definite high point on the West End stage right now. 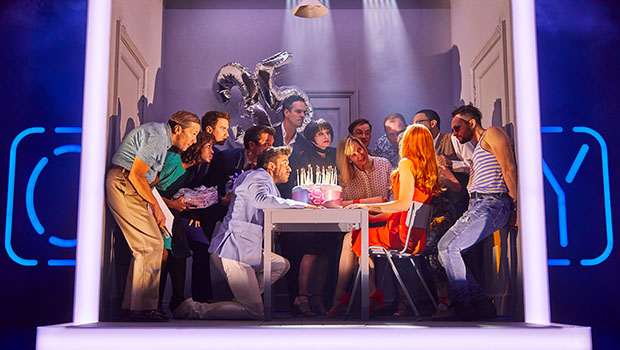 Every aspect of the show is suffused with real life. David Cullen’s new orchestrations performed under Joel Fram’s sprightly musical supervision make the score sound bracingly fresh; Bunny Christie’s inventive design of sliding boxes and neon lighting from Neil Austin give it an excitingly unique look and though there’s not a huge amount of dancing, Liam Steel’s choreography is witty and well-placed and will linger in the memory for its sheer sense of fun. And on top of all this is the kind of luxury casting you could normally only dream of.

Rosalie Craig is phenomenal as Bobbie, rarely off the stage and a vibrant, vital presence as she cycles through the emotions of dealing with everyone else’s expectations of her, until that crushing moment in the finale of "Being Alive" when she finally comes to the realisation that she needs to decide exactly what she wants for herself. And Broadway legend Patti LuPone doesn’t disappoint as her friend and advisor Joanne, a deliciously dry performance packed full of knowing humour, vodka stingers, and a brassily magnificent belt that makes her "Ladies Who Lunch" a highlight of the show.

And as the couples around her who display marriage in its different states, there’s great work from Mel Giedroyc and Gavin Spokes as a long-suffering pair working out their frustrations through martial arts, Jennifer Saayeng and Richard Henders who enjoy a joint together to keep the peace, and about-to-be-married Alex Gaumond and Jonathan Bailey, whose epic patter song "Getting Married Today" is another jaw-dropping moment of brilliance. This really is musical theatre at its best – book your tickets today.