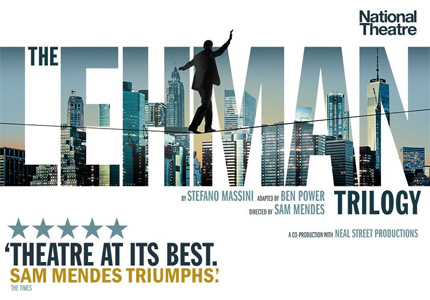 The National Theatre’s hugely successful production of The Lehman Trilogy returns to the West End after a Tony Award-winning season on Broadway.  This epic play tells the story of the Lehman Brothers firm, which fell into administration and triggered the 2008 financial crash. Beginning with three brothers who arrived in New York from Bavaria, it covers 163 years of one family’s history, from humble beginnings and dizzying success to the devastating fall of a dynasty.  Directed by Sam Mendes, The Lehman Trilogy is at the Gillian Lynne Theatre for a strictly limited season in 2023.
Read more
FIND TICKETS
Booking until 20 May 2023
Run time is 3 hours 20 minutes (including two intervals) 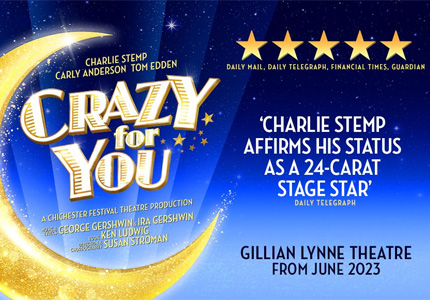 Sublime Gershwin musical Crazy For You is feel-good, classic Broadway fun in London. This showbiz story about a banker who travels to foreclose on a mortgage and finds the girl of his dreams features upbeat tap routines, melodious songs including “I Got Rhythm” and “Embraceable You” is directed by ony Award winner Susan Stroman and stars Charlie Stemp and Carly Anderson. It tap-danced over to the capital after a sensational 30th anniversary season at Chichester Festival Theatre, and now delights audiences at the Gillian Lynne Theatre.
Read more
FIND TICKETS
Booking from 24 June 2023 until 20 January 2024
Run time is 2 hours 45 minutes (including an interval)

The Gillian Lynne Theatre’s box office is open on Performance days (Monday – Saturday) from noon until the start of the show and on Sundays 10am-6pm. Pre-purchased tickets can be collected from the theatre’s box office from an hour before the performance is due to start. Customers will need to bring the card they used to make the purchase as well as their booking reference. Visit the official website

One of the newest theatres on the West End, the Gillian Lynne Theatre (formerly New London Theatre) was built in 1973, on a site that has housed a theatre since Elizabethan times. Originally named the Mogul Saloon, the building lasted between 1847-1919, housing variety shows.

In 1919, the theatre was renamed the Winter Garden Theatre, reopening with P. G. Wodehouse's Kissing Times. Throughout the early 20th century, Gershwin musicals began to rise in popularity, with the theatre hosting Primrose (1924) and Tell Me More (1925). A hugely popular production of Funny Face (1929) also played at the venue, starring Fred and Adele Astaire.

Following the bout of musicals, the theatre began to stage plays such as George Bernard Shaw’s On the Rocks (1933) and Walter Greenwood’s Love On The Doll (1935). After a closure of several years, the theatre reopened with dramas, including Agatha Christie’s Witness for the Prosecution (1953). Sadly, the theatre began to lose audiences and closed once more in 1959.

In 2009, the Gillian Lynne Theatre struck lucky with the transfer of the National Theatre's War Horse, which ran at the venue until early 2016. Further productions have since included The Elephantom (2014) and Sheffield Crucible's five-star Show Boat (2016), which earned Rebecca Trehearn an Olivier Award for Best Supporting Actress in a Musical.

Andrew Lloyd Webber's Broadway hit School of Rock the Musical transferred to the venue in 2016, earning rave reviews from audiences and critics alike. The musical played its final performance at the venue in March 2020.

The Gillian Lynne Theatre underwent refurbishment works prior to the opening of Andrew Lloyd Webber's brand new musical adaptation of Cinderella in June 2021, starring Carrie Hope Fletcher in the title role. The production was due to open in 2020 but was postponed due to the COVID-19 pandemic.

Andrew Lloyd Webber's Cinderella closed in June 2022, following a year-long West End run. The acclaimed touring production of C.S. Lewis' The Lion, The Witch and the Wardrobe transferred to the Gillian Lynne Theatre in July 2022 for a six-month run. Olivier and Tony Award-winning play The Lehman Trilogy runs for a limited season at the theatre in early 2023.