"There’s a creepy, illusory feel which keeps the audience guessing whether or not we can trust our eyes"

Jamie Lloyd’s Pinter at the Pinter season has been serving up the late playwright’s works in complimentary palettes: grouped by themes of memory, for example, or politics. If there’s a link between Moonlight and Night School, the pair of plays that make up Pinter Four, perhaps it’s the patriarch’s grasp for control. We see the men of the household in both instances trying to claw at the last vestiges of authority, whether that’s ownership of his bedroom (Night School) or the conditions of his death (Moonlight). In both, night-time provides the element of the unknown: it is the cover under which secret goings-on are housed, such as the mysterious school teacher’s late activities, and it is the unknowable darkness of the ultimate sundown that awaits a dying man.

In Moonlight, a father prattles on at his wife from his deathbed, raking over old affairs but always harking back to the same complaint: why aren’t his children here beside him in his final hours? Other figures share the same space; which of them are real but elsewhere, and which are simply figments of his imagination? 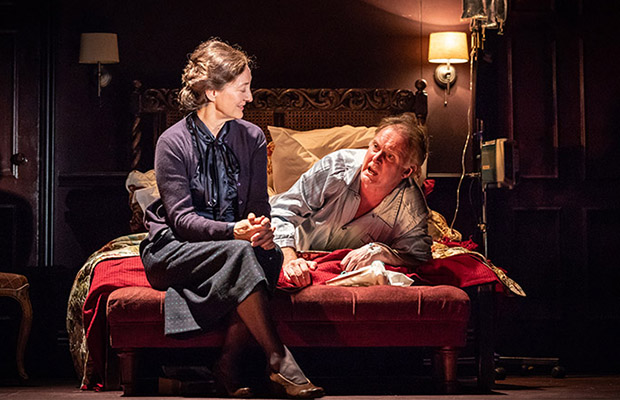 The script’s comedy, of which there is much, offers brief respite from the cold starkness of the deathbed but is perhaps not given enough room to flex under Lyndsey Turner’s staid direction. Soutra Gilmour’s highly naturalistic set fits the primary scene, but the tangle of other ‘elsewhere’ scenes playing over it heighten the confusion of an already elusive script.

Where the set and direction succeed, however, is with the ever so faint figures in doorways emerging into the light. There’s a creepy, illusory feel to these moments which keeps the audience guessing whether or not we can trust our eyes.

Isis Hainsworth is brilliant as a little girl lost (the couple’s absent daughter), played with pitiable vulnerability. Brid Brennan is a study of brittle tolerance as the wife and mother.

Night School offers a very different aesthetic under Ed Stambollouian’s direction. The revolving stage used in Pinter Three is brought into play, the entire stage is opened up and a drum kit dominates from centre upstage. This is the tale of an East End boarding house and seedy nightclubs; of a young chap fresh out of prison and the enigmatic young woman who has moved into his old room. 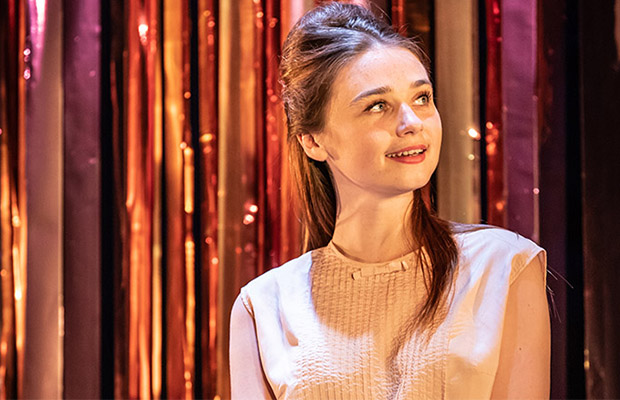 The whole piece is accompanied by drummer Abbie Finn’s bold percussion, which punctuates, anticipates and underlines each turn of the plot. The effect is at times harsh and foreboding, at others exuberant or farcical.

The highlight here is the comedy coupling of Brid Brennan and Janie Dee, the ageing aunts who run the boarding house. They’re wonderfully batty, preoccupied with peddling rock cakes and eavesdropping behind doors.

Moonlight / Night School offers a chance to experience two eras of Pinter; they were written in 1993 and 1960 respectively. There’s humour, there’s darkness and you can be sure that nothing is what it seems. And who knows when they’ll next be in the hands of such a stellar ensemble?