"Full of fantastic performances, caricaturing the lives of the rich"

Jamie Lloyd’s sixth instalment of his Pinter series sees a gaggle of the super-rich glugging wine, blissfully unaware of the world which revolves, and revolts, around them.

Party Time is a dark and sophisticated scene, clad in their best black attire the group sit regally on a row of chairs, holding up their glasses of red wine which may as well be a sceptre or a vessel of blood. Conversation centres around a brand new luxury club which everyone recommends, but there’s a sense of uneasiness throughout it all: “Where is Jimmy? Where is my brother?” asks Eleanor Matsuura’s Dusty, with mascara running down her face and shaking hands. As the group continue to praise their exclusive club, a low rumbling adds to the unease. There’s a door which keeps stretching open, but never quite fully. It’s frustrating, tense, yet also trivial – just aching for the group to shut up. There’s certainly another angle this short could be told from, and yet it’s more interesting to keep everything unknown. 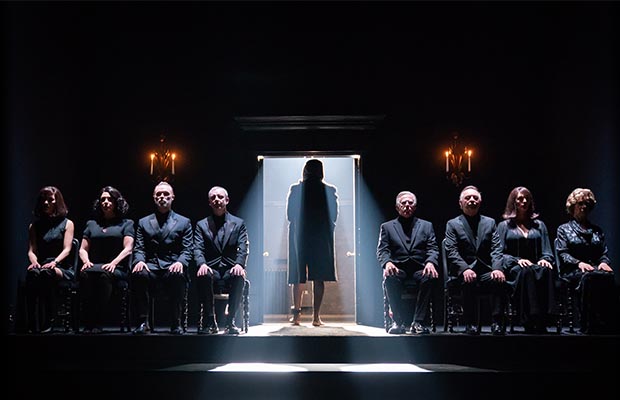 The cockney-infused Celebration is a much more colourful affair, with costumes of gold and blue (designed by Soutra Gilmour) along with plenty of talk of spending time behind ‘filing cabinets’ from Suki (Katherine Kingsley).
Celia Imrie and Tracy-Ann Oberman play a pair of sisters married to a pair of brothers, out for a ‘piss-up dinner’ for their wedding anniversary with delight, whilst Kingsley and John Simm play a banker and his wife also present at the restaurant. The parties make complaint that they didn’t understand the opera or ballet they had just seen, and the waiters continuously interject, proving their intellectual standing. Side note: I wonder if any of the audience felt the same way watching Pinter? One of the waiters – played triumphantly by Abraham Popoola – claims his grandfather knew every literary or political figure of the 20th Century. A bold claim, but one which puts into perspective the many ways to live.

Pinter Six is a ensemble piece full of fantastic performances, caricaturing the lives of the rich.