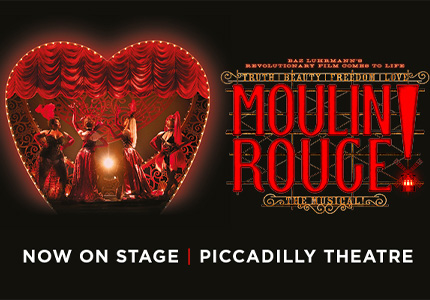 The spectacular stage adaptation of Baz Luhrmann’s revolutionary film Moulin Rouge! The Musical brings glitz, glamour, romance and tragedy to London's Piccadilly Theatre. With a score packed with some of the biggest pop hits of all time, Moulin Rouge! The Musical is an unmissable show for music, movie and theatre fans alike.
Read more
FIND TICKETS
Booking until 3 June 2023
Run time is 2 hours 35 minutes (including an interval)

The Piccadilly Theatre Box office is open from Monday to Saturday from 10am until the start of the show Tickets can be arranged for collection at the box office and may be picked up from 45 minutes before the performance is set to begin. On collection you will need to present your booking reference and the card on which the booking was made. Parties can also leave tickets at the box office for late patrons. Piccadilly Theatre London

First opening in 1928, the Piccadilly established itself as a major theatrical venue with a production of Jerome Kern's Blue Eyes, starring Evelyn Lane, one of the most acclaimed actresses of the period. Briefly taken over by Warner Brothers in the early years, the Piccadilly hosted the UK's first ever talking picture, The Singing Fool.

In 1929, the venue reverted back to a theatre, housing The Student Prince (1929) and Folly to be Wise (1931). Following a brief stint as a cabaret restaurant, the theatre re-opened as the London Casino in 1936, hosting lavish stage extravaganzas. Unfortunately, the theatre was damaged by a bomb during the Second World War and was closed for renovations.

The 1950's saw the theatre restored and once again hosting prolific plays, revues and musicals. Who's Afraid of Virginia Woolf?, A Streetcar Named Desire and Man of La Mancha made their debuts at the theatre throughout the 1960's and 70's. In 1964, The Beatles recorded a number of songs for a radio show, whilst 1976 saw Jerome Kern and Guy Bolton's musical Very Good Eddie run for 411 performances.

From 1986, the Piccadilly became the host of ITV variety show Live From the Piccadilly, with Jimmy Tarbuck, followed by seasons of dance and ballet, including Matthew Bourne's Swan Lake.

In recent years, the Piccadilly Theatre has played host to Jersey Boys (2014), which transferred over from the Prince Edward Theatre and continued to play to packed out audiences until March 2017.

Following the departure of musical sensation Jersey Boys, which embarked on a UK tour, the Piccadilly played host to the return of Russian company Sovremennik Theatre, who played limited performances of Three Comrades, Two for the Seesaw and Three Sisters. May 2017 saw beloved musical Annie revived at the theatre, directed by Nikolai Foster and starring Miranda Hart, Craig Revel Horwood and Meera Syal as the harridan Miss Hannigan.

2018 also saw the West End return of audience favourite The Curious Incident of the Dog in the Night-Time. In 2019, the theatre housed the National Theatre's epic The Lehman Trilogy, starring Simon Russell Beale, Adam Godley and Ben Miles.

Later in 2019, the producers of Riverdance presented a new dance show Heartbeat of Home.

In October, the Young Vic transferred its critically-acclaimed revival of Arthur Miller's Death of a Salesman, starring Wendell Pierce and Sharon D Clarke. During a performance on November 6th 2019, the ceiling above the Upper Circle collapsed causing the theatre to be evacuated. Performances were cancelled for the remainder of the week and resumed on November 11th.

In February 2020, Pretty Woman the Musical began performances, based on the 1990 film of the same name. The musical starred Aimie Atkinson and Danny Mac. The musical transferred to the Savoy Theatre in July 2021 to make way for the smash-hit Broadway musical adaptation of Moulin Rouge! which opened in November 2021.