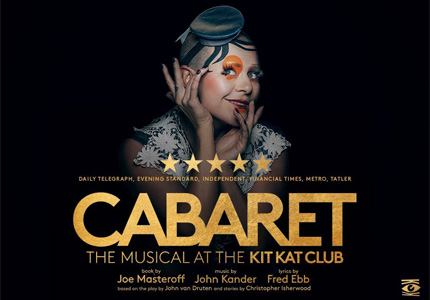 Callum Scott Howells (It's a Sin) and Madeline Brewer lead an intimate and electrifying production of Kander & Ebb's iconic musical Cabaret.  The Olivier Award-winning production sees the Playhouse Theatre transformed into the Kit Kat Club, an in-the-round performance space transporting audiences to underground Berlin as the city's freedom is under threat by the rising power of the Nazi Party. Cabaret is directed by Rebecca Frecknall and features classic songs including "Maybe This Time", "Willkommen", and the classic title track "Cabaret".
Read more
FIND TICKETS
Booking until 16 December 2023
Run time is 2 hours 45 minutes (including an interval)

The Playhouse Theatre box office is open Monday to Saturday from 10am to 8pm. Audience members collecting tickets for a show can do so within the hour before the performance is due to begin. collectors will need their booking reference number as well as the credit or debit card used to make the payment. Visit the official website

Originally opening in 1882 as the Royal Avenue Theatre, the theatre was best-known for hosting comic operas, farce, music hall and burlesque, with the first ever production being Offenbach's Madame Favart. Playwright George Bernard Shaw made his debut at the theatre with Arms and the Man (1894), earning him enough acclaim to keep him in the public eye.

In 1905, the theatre was rebuilt under new designs, but an accident from the nearby station caused the theatre to undergo repairs and reopen in 1907, with The Drums of Oudh and Toddles, as well as Shaw's The Interlude at the Playhouse. Early plays included Home and Beauty (1919), Mr. Abdulla (1926), The Letter (1927) and Dishonoured Lady (1930). Alec Guinness made his debut at the theatre in Libe! (1934).

From 1951, The Playhouse became a recording studio for the BBC, with radio versions of The Goon Show and Steptoe and Son taking place at the venue. Concerts from bands such as Queen, Pink Floyd, The Beatles, Led Zeppelin, KISS, The Who and The Rolling Stones also were popular here. After the BBC departed in 1976, the theatre went dark.

1987 saw the theatre back in action, with productions such as musical Girlfriends (1987), The Rose Tattoo (1991), starring Julie Walters, Moliere's Tartuffe (1991), starring Felicity Kendal, It Runs in the Family (1992), Jane Eyre (1993), starring Tim Piggott-Smith, On Approval (1994) and Funny Money (1995). Throughout this time, the theatre changed management regularly, with further productions including dramas such as Ibsen's A Doll's House (1996).

In 1996, English Heritage put the theatre under refurbishment, reopening in 1997 with Chekhov's The Wood Demon, before becoming a receiving house for the Almeida Theatre and Cheek by Jowl, including the premiere of David Hare's The Judas Kiss.

Following the departure of An Inspector Calls, subsequent productions included a return of David Baddiel's comedy My Family: Not the Sitcom (2017), due to high demand. After a critically acclaimed season at Wyndham's Theatre, The Kite Runner (2017) soared into the Playhouse Theatre for limited performances, followed by Derren Brown: Underground. The year rounded off with an all-star cast in David Mamet's Glengarry Glen Ross, starring Christian Slater.

2018 saw Bill Kenwright's touring production of The Best Man play a limited season, starring Martin Shaw and Maureen Lipman. The Young Vic's The Jungle transferred to the Playhouse Theatre in June 2018, followed by the Chichester Festival Theatre's critically-acclaimed Caroline, or Change, which played from November - March.

2019 saw five-star Menier Chocolate Factory production Fiddler on the Roof transfer to the venue in March. In November, director Jamie Lloyd began a season of new productions at the Playhouse with an adaptation of Cyrano de Begerac starring James McAvoy.

Planned productions of Anton Chekhov's The Seagull starring Emilia Clarke, and Henrik Ibsen's A Doll's House with acclaimed film actress Jessica Chastain were postponed due to the COVID-19 pandemic.

The Playhouse Theatre reopened in November with an all-star revival of the musical Cabaret, starring Eddie Redmayne and Jessie Buckley. From March 2022, the cast was lead by Fra Fee and Amy Lennox.