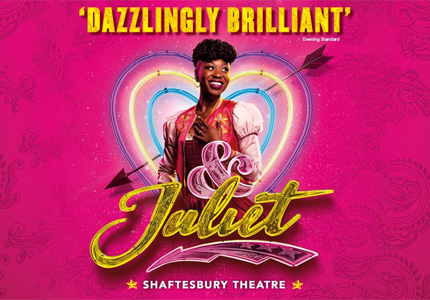 & Juliet is a brand new pop musical playing at the Shaftesbury Theatre, London, which sees Juliet become the leader of her own story. What if her famous ending was really just her beginning? The glorious new musical features pop songs by Max Martin, including '...Baby One More Time', and 'Love Me Like You Do'. This joyous show, crammed full of the biggest pop songs of the last 20 years, is the ideal way to party the night away with Juliet and friends. Don't miss this hit West End show.
Read more
TICKET OFFER
WAS £54.00NOW £35.00
Booking until 25 March 2023
Run time is 2 hours 30 mins (including an interval) 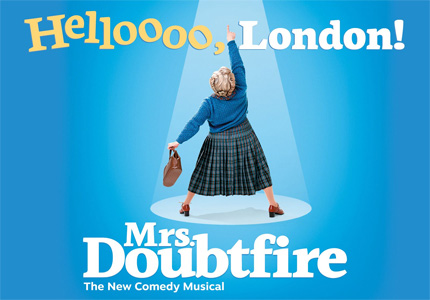 Yoo-hoo, London! After dazzling audiences on Broadway and at Manchester’s Palace Theatre, new musical comedy Mrs. Doubtfire runs at Londn’s Shaftesbury Theatre. The much-loved story of a struggling actor and dad who goes to extreme lengths to see his children - and creates an iconic alter-ego in the process - has been transformed for the stage with brand new songs by Wayne Kirkpatrick and Karey Kirkpatrick (Something Rotten!, Chicken Run). This is one musical you won’t want to miss, dearies.
Read more
FIND TICKETS
Booking from 12 May 2023 until 13 January 2024
Run time is 2 hours 30 minutes (including an interval)

The Shaftesbury Theatre box office is situated within the theatre building on Shaftesbury Avenue and is open Monday – Saturday from 10am – 7.45pm. Tickets arranged for collection can be picked up from the box office on the day of the performance during the hour before the show starts. Those collecting tickets will need to bring their booking reference number and the card on which they booked the tickets. Shaftesbury Theatre London

Designed by prolific theatre architect Bertie Crewe, the Shaftesbury Theatre first opened in 1911 under the name of the New Prince’s Theatre, with a production of The Three Musketeers. In 1914, the building was renamed the Prince’s Theatre and housed several Gilbert and Sullivan operas.

Early productions at the venue included a well-received production of Funny Face (1928), starring Fred and Adele Astaire, Diplomacy (1933), starring Basil Rathbone, The Rose of Persia (1935), the ballet Carmen (1949), Gentlemen Prefer Blondes (1962) and How to Succeed in Business Without Really Trying (1963-1964).

Broadway import Motown: The Musical opened at the Shaftesbury Theatre in 2016 and will entertain audiences until April 2019, followed by a UK tour. International magic show The Illusionists will run for a limited summer season.

Autumn 2019 saw new pop musical & Juliet by Grammy Award-winning songwriter Max Martin take to the stage, following a hugely successful premiere in Manchester. The theatre closed its doors in March 2020 in response to the Coronavirus pandemic and remained closed until May 2021.

Smash-hit musical & Juliet returned to the venue in September, starring many members of the original cast. Its closure was announced for 25 March 2023.

In May 2023, the West End premiere of Mrs. Doubtfire, a musical based on the hit film, will open at the Shaftesbury Theatre.