A musical with a superhero-sized heart and uplifting score

A universal message of self belief, a winsome 80s aesthetic, a highly hummable score: Eugenius! has a lot going for it. The new musical directed by Olivier Award-nominated Ian Talbot enjoyed a successful run at The Other Palace and now returns to the same venue with new casting, a tightened script and an additional song.

Eugene is a lovable geek (NOT a nerd as, “nerds love numbers, geeks love gadgets”) who’s struggling with the perils of adolescence, bullies and an ever-distant father. Luckily he’s got a solid bunch of friends and a monumental talent: he creates comic strips. When a big-shot Hollywood producer picks up his epic story of Tough Man and nemesis Evil Lord Hector, Eugene steps into a new life beyond his dreams. 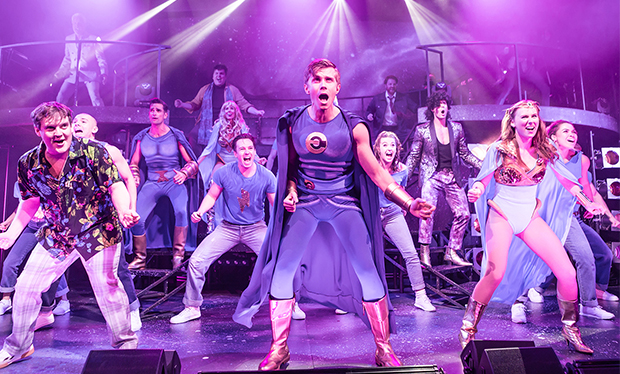 A starry, multi-level set and eye-catching costumes that span vintage through to futuristic ensure this show is a treat to look at. Zany characters and plentiful jokes keep the laughter coming. However, there aren't many moments in which high energy and slapstick give way to something more. There's earnest best friend Janey of course, and mention of Eugene's late mother, but the show is almost relentlessly jovial, like an audition for children's TV presenters. There's little to distinguish Eugene's comic book characters from the ‘actors’ portraying them, as they're all rather 2D. The airheaded Super Hot Lady fails to make much of an impression and the school bullies and Hollywood ‘yes men’ are a study in cliché.

Neil McDermott, on the other hand, is a show-stealer, breathing new life into the evil-British-guy stereotype. Laura Baldwin is sweetly winsome as Janey while Rob Houchen demonstrates a wonderfully controlled voice.

Ben Adams’ score is undeniably catchy and new number “Comic Book Kind of Love” is a welcome addition – tender and hopeful. It’s “Go Eugenius!” that tops the list though, and proves a joyous song to end on. It’s pure optimism and euphoria packaged in a made-to-singalong melody.

It may lack a little depth, but Eugenius! is bold, sparkly fun with a superhero-sized heart.