Not completely divine, but some heavenly comedic moments

Rather than a pantomime or concert, The Other Palace have selected an alternative production for their festive season: Patrick Barlow’s The Messiah, a comedy of ‘Biblical proportions’ featuring an all-star cast.

Taking on the ‘play-within-a-play’ format – and rather like a less exuberant The Play That Goes Wrong – the performance sees a travelling theatre duo team up with an opera singer to tell the Nativity story. Of course, not everything goes to plan and there are a few hiccups along the way; though luckily not the set-breaking kind.

With a cast featuring two talented comic actors and a renowned opera singer, it is hard not to be taken in by the charm of the production. Both Hugh Dennis and John Marquez play their roles as travelling actors well, teasing out laughs through their serious manner. In particular, Marquez catches the audience’s heart as a clueless actor who only wants to do his best – complete with feet-shuffling and sullen facial expressions.
Lesley Garrett’s role as opera diva Mrs F is a wonderful festive addition to the show, and it’s a treat to hear her sing classics such as "Silent Night" and the "Hallelujah Chorus" from Handel’s The Messiah. Ultimately, it’s a shame that her singing is under-utilised, as she does more sitting than soprano work. 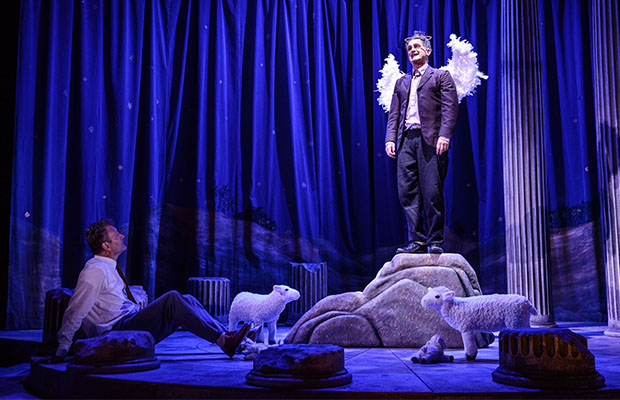 Written by Patrick Barlow, who also penned The 39 Steps, the show first opened in 2001, and much of the script appears to remain the same. There are some updates such as a Call the Midwife reference which has the best reception in the show, as well as an inevitable Brexit joke. Despite the updates, scenes tend to drag and don’t have as much punch as they perhaps could; a section of audience interaction at the end of Act One is very welcome. A gentle and contained comedy, it won’t have your sides splitting with laughter, but it will leave you mildly amused. Francis O’Connor’s set is delightful: a velvet starred curtain complete with a pillared revolve and moving star, and Howard Hudson’s lighting complements it, adding to the cosy atmosphere.

The Messiah is an alternative Christmas production which, although not completely divine, does have some heavenly comedic moments.