If you took all the American high school cult films such as Mean Girls and Clueless, hacked off their smooth edges with a rusty razor blade and stitched the whole glorious mess through with powerhouse songs, you'd have Heathers The Musical. This darkly hilarious show charts the rise of Westerberg High student Veronica from nobody to one of the populars thanks to her involvement with the beautiful, brutal Heathers. She soon realises the gang's cruelty isn't worth the high status they afford her. When Veronica meets mysterious loner JD, an unorthodox way out of her predicament presents itself. 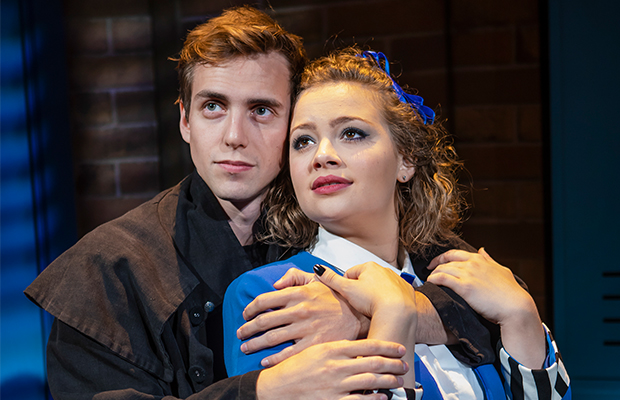 Based on the 1988 film Heathers starring Winona Rider, the stage show directed by Andy Fickman is true to the story but is a different beast, managing to be angstier, funnier and warmer. Its bright, primary school colour palette belies its black content; the source of its laughs are unwaveringly dark, from anorexia to sexual assault, homophobia to suicide. But the show earns its right to make fun of these things because it also affords them their deserved weightiness and authenticity. The result is a study of teenage angst that makes you want to cry almost as often as laugh.

Since transferring from a record-smashing sold-out run at The Other Palace, Heathers The Musical has made several script changes and added a new song. “I Say No”, sung by an anguished Veronica, really blows the roof off. “Candy Store” is another highlight, showcasing Gary Lloyd’s sharp choreography, while “My Dead Gay Son” is a perfect study of delirious irreverence.

Carrie Hope Fletcher (Les Miserables, The Addams Family, Chitty Chitty Bang Bang) is a musical theatre professional through and through. Her bodacious seduction of JD is a comic highlight, and her voice is a pitch-perfect pleasure to hear.

Jamie Muscato (Les Miserables, Cilla) is wonderfully intense as tortured soul JD, with eyes that burn and a nervous energy that seethes. Jodie Steele (Wicked tour, Zelda) is both formidable and funny as Heather Chandler, the leader of the Heathers, and she’s a flawless dancer to boot.

There isn’t a minute of Heathers The Musical that doesn’t earn its place. Riotous, heart-rending and black as pitch, it’s a fitting addition to the cultish immortality of the Heathers canon.