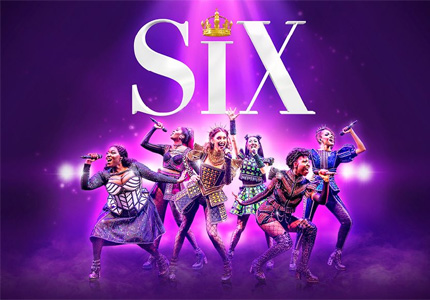 The Queens of Six the Musical continue their reign over London's West End as the smash-hit production finds its forever home at the Vaudeville Theatre. The electrifying 80-minute pop-concert musical sees Henry VIII's infamous six wives tell their story in an all-singing, all-dancing fashion. Since premiering at the Edinburgh Fringe Festival in 2017, the musical has reached stratospheric heights with productions in the West End, on Broadway and around the world.
Read more
FIND TICKETS
Booking until 29 October 2023
Run time is 80 minutes (without an interval)

The Vaudeville Theatre box office is located within the theatre building on the Strand and is open from 10am to 8pm Monday to Saturday. Tickets can be collected from the theatre on the day of the performance during the hour before the show starts. When collecting pre-paid tickets you will need to bring the card with which you made the purchase as well as your booking reference. Visit the official website

Designed by theatre architect CJ Phipps, the Vaudeville Theatre first opened in 1870 with comedy For Love and Money and burlesque act Don Carlos or the Infante in Arms. The theatre’s opening year also saw Henry Irving achieve commercial success in James Albery’s Two Roses, which ran at the venue for 300 performances.

Subsequent successful productions included comedy Our Boys (1875), which ran for 500 shows. In 1889, Thomas Thorne demolished the houses behind the venue in order to expand the building. It reopened in 1891 with Woodbarrow Farm, followed by a revival of Our Boys (1892), The French Maid (1898) and Bluebell in Fairyland (1901).

The Vaudeville reopened in 1926 after refurbishment, with a revue show called R.S.V.P., followed by The Bread-Winner (1930). Record-breaking musical Salad Days transferred to the venue in the late 1950’s, conceded by Chips with Everything (1959).

By this time, the theatre had become renowned for a quick turnover of plays and comedies, with notable productions including The Female of the Species (2008), Piaf (2008-2009), Woman in Mind (2009), starring Janie Dee, Duet for One (2009), starring Juliet Stevenson, The Rise and Fall of Little Voice (2009-2010) and many short-running stints from comedians and entertainers.

2017 saw a short stint from comedy Boys in the Band, starring Mark Gatiss, and a revival of comedy Stepping Out, starring Amanda Holden and Tracy-Ann Oberman. Further productions include an adaptation of Lewis Carroll's beloved poem The Hunting of the Snark as well as transfer of The Mentor from the Theatre Royal Bath, starring F. Murray Abraham.

The end of 2017 and beginning of 2018 saw Dominic Dromgoole embark on a year-long residency, presenting some of Oscar Wilde's greatest plays, including A Woman of No Importance, starring Eve Best, and Lady Windermere's Fan, starring Samantha Spiro and Jennifer Saunders. Tall Stories also brought their adaptation of Wilde Creatures to the Vaudeville Theatre.

The Oscar Wilde season continued into 2018, featuring productions of The Selfish Giant, An Ideal Husband and The Importance of Being Earnest. After two short stints from comedians James Acaster and Mo Gilligan, the year rounded off with thriller True West, starring Kit Harington and Johnny Flynn.

In 2019, Shakespeare's Globe's critically-acclaimed show Emilia graced the stage, starting performances on International Women's Day (8th March). This was followed by limited runs of BalletBoyz' double bill Them/Us and a Russian production of Chekhov's Three Sisters. Following this, comedian Adam Kay brought his award-winning stand-up show This is Going to Hurt to the venue for a fortnight.

In the summer, a new stage adaptation of children's classic The Worst Witch played.

In September, West End favourite Mischief Theatre began their year-long residency of three shows at the theatre. The first was school-based comedy Groan Ups, this was followed by Magic Goes Wrong in December. The Vaudeville Theatre closed in March 2020 to help combat the spread of coronavirus. The theatre reopened temporarily in December 2020 with a production of Mischief Theatre's Mischief Movie Night, however government regulations caused the theatre to close once again.

The Vaudeville Theatre reopened in 2021 with a revival of the play Constellations performed by four rotating sets of actors, including Zoë Wanamaker, Chris O'Dowd, Russell Tovey and Anna Maxwell Martin.

Smash-hit pop musical SIX transferred to the theatre in September from the nearby Lyric Theatre for an open-ended run.