The Royal Shakespeare Company really hit the jackpot with Matilda, the musical adaptation of Roald Dahl’s children’s book. Having now been in residence at London’s Cambridge Theatre since 2011, the show is a devilish delight.

Dennis Kelly and Tim Minchin’s adaptation tells the story of a young bookworm whose neglectful parents think little girls should be seen and not heard. When she starts school and comes up against the angry, hammer-wielding Miss Trunchbull, Matilda learns to harness the power of her own voice… with a little bit of telekinesis thrown in. 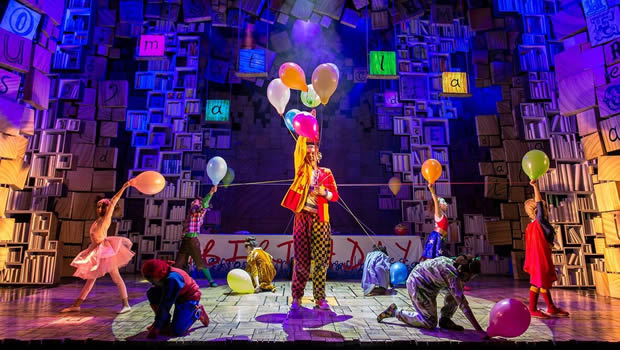 Matilda’s success is undoubtedly down to Kelly and Minchin’s clever script and music. Where lesser writers might have attempted to imitate Dahl, they instead bring their own witticisms and quirk, amplifying both the heart and grotesque humour that is core to the original story.

Minchin’s songs are a winning mix of mischief and sincerity, pitched perfectly for the adult and child cast members. Opening number “Miracle” is a chaotic, cacophonous display of bratty children and bragging parents, with a diminutive Matilda standing alone at the centre. Most memorable however is “When I Grow Up”, a literally soaring number thanks to Peter Darling’s choreography which sees children fly out over the stage on swings.

The set design is also a treat, with towers of building blocks flanking the stage. Rob Howell has ingeniously hidden dozens of words amongst these lettered tiles, so watch out for children in the audience delightedly spelling out B-U-R-P. Whilst the scenes at the school and in the Chokey are grey and menacing, this multicoloured arch projects a playful, disordered spirit. 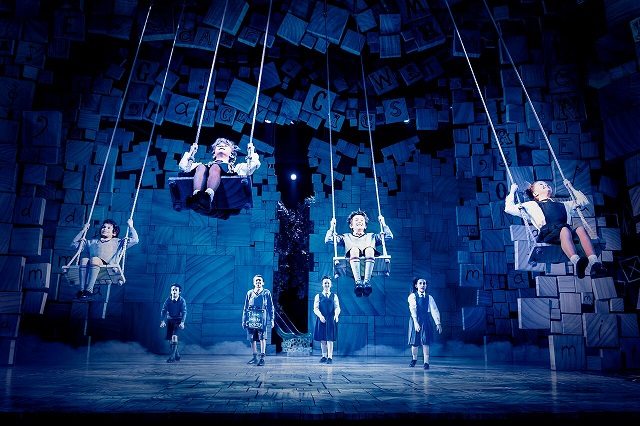 Every show needs its villains, and Sebastien Torkia and Marianne Benedict as the Wormwoods are slimy, vain and abusive without becoming caricatures. On the opposite end of the parental spectrum Gina Beck’s Miss Honey is perfectly sweet but not saccharine. As for the child actors, led by Tilly-Raye Bayer as Matilda at this performance. They’re genuinely endearing even if their vocals aren’t always quite in tune.

But there’s one character that everyone’s anticipating. Towering, terrifying and hilarious, Elliot Harper’s Miss Trunchbull stalks and gurns her way across the stage. The stuff of panto-villain nightmares, Harper’s physical comedy draws plenty of laughs and squeals, and has the desired effect; when this terror of a headmistress gets her comeuppance, the audience is noisily cheering.

In a crowded West End vying for your attention and money, there aren’t many musicals that leave the same warm, satisfying feeling as Matilda. This is a family show that isn’t afraid to lean into the dark and grotesque, but it’s far from a revolting rhyme. Whether you’re chasing nostalgia or just a vibrant night out, Matilda hits the spot.