One of the rudest, non-PC, gut-wrenchingly hilarious shows ever put to music

Still one of the hottest tickets in London’s West End, almost a decade after its premiere, The Book of Mormon is one of the rudest, non-PC, gut-wrenchingly hilarious shows ever put to music.

The Tony and Olivier Award-winning musical is created by Trey Parker, Robert Lopez and Matt Stone, collectively known for the sardonic animated sitcom South Park and the irreverent musical Avenue Q. The Book of Mormon follows two Latter-Day Saints missionaries attempting to preach their faith to the inhabitants of a remote Ugandan village. 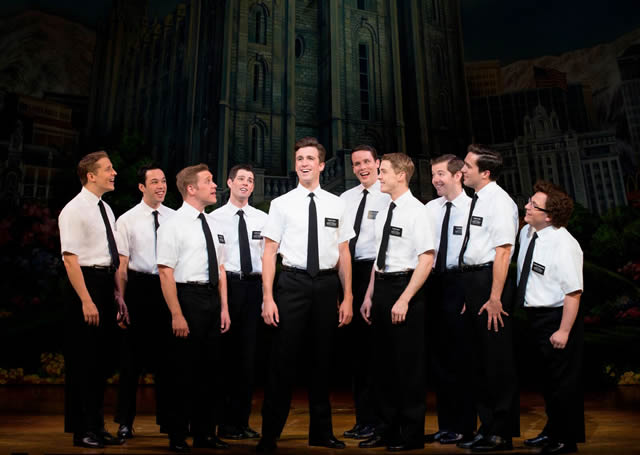 The score is crammed full of some of the catchiest songs in the modern musical theatre canon. I defy you to not hum the show’s opening number, Hello, every time you ring a doorbell after seeing the show. Other highlights include I Am Africa, which evokes the classic celeb-laden charity single, the toe-tapping Turn It Off, and the ultimate power ballad, I Believe.

Dom Simpson, currently plays Elder Price, following a stint in the Broadway cast in 2016. He captures the role’s wide-eyed, youthful innocence perfectly, sprinkling his own brand of preppiness on top. Playing opposite Simpson is Tom Xander as Elder Cunningham, playing off Simpson and the rest of the cast brilliantly. He doesn’t miss a single beat and wrings every ounce of humour out of his solo numbers.

The talented ensemble make Casey Nicholaw’s intricate choreography feel fresh and effortless. A particular standout is Steven Webb who stops the show shimmying and tapping up a storm during the musical number, Turn It Off.

The Book of Mormon is loud, brash and makes no bones about it – definitely a show to book a babysitter for! The humour is not for the faint-hearted and could easily offend some audience members. However, at its core, there is a huge heart and a touching message buried within the mountains of laugh-out-loud gags.