Back to the Future the Musical 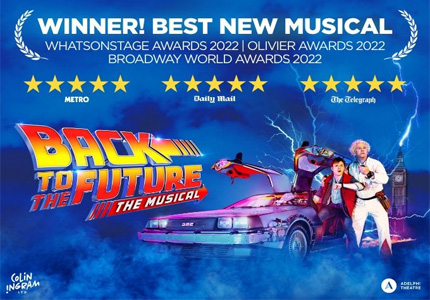 Great Scott! Back to the Future the Musical is bringing the power of love along with a timeless family adventure to London's Adelphi Theatre. Truly a story for all time - Back to the Future is one of the most cherished, feel-good movies of the 80s. Now, thanks to a passionate and skilled team of theatre practitioners, it has been turned into a spectacular, high-energy musical that is guaranteed to please all ages. After an acclaimed debut at the Opera House, Manchester - this musical adaptation of one of the greatest-loved comedy films in history has been warming the hearts and tickling the funny bones of West End audiences since 2021.
Read more
FIND TICKETS
Booking until 22 October 2023
Run time is 2 hours 40 minutes (including an interval)

The Adelphi Theatre box office is located within the theatre building on the Strand and is open Monday to Saturday from 10am – 8pm.  Tickets can be collected from the box office within the hour before the performance is due to start. Those collecting tickets will need their booking reference number and the card they used to make the booking. Please note that there can be quite a queue for ticket collection so it is advisable to leave yourself plenty of time to pick up your tickets.  Visit the official website

Originally opening in 1806, the Adelphi Theatre had early performance roots in pantomime, burletta, operas and melodrama, with many productions dubbed as Adelphi Screamers.

In the 1830’s, the Adelphi became well-known for producing some of the first stage adaptations of Charles Dickens novels. For example throughout the mid 1800’s, the Adelphi was home to The Bloomsbury Christening, The Pickwick Papers, Nicholas Nickleby and A Christmas Carol.

One of the most famous murders in theatrical history took place at the Adelphi Theatre. In 1897, actor William Terris was stabbed to death at the stage door before he was due to star in a performance of Secret Service. Terris’ ghost is said to haunt the theatre to this day.

The early 20th century saw a greater influx of musicals and operettas at the Adelphi, including The Earl and The Girl (1904) and The Quaker Girl (1910). Towards the mid-20th century the theatre premiered Noel Coward’s Words and Music (1932), and later when on to resume its trend of light-hearted musicals such as Maggie May (1964) and A Little Night Music (1975).

In a slight break from the current trend of large-scale musicals, the theatre became home to the National Theatre's hugely successful One Man Two Guvnors (2011), which then moved to the Theatre Royal Haymarket.

In 2012, The Bodyguard musical made its world debut at the Adelphi Theatre. Heather Headley originated the role of Rachel Marron in the show and was then replaced by international superstar Beverley Knight, who was later replaced by X Factor winner Alexandra Burke.

In December 2014, the musical premiere of Made in Dagenham opened at the Adelphi Theatre, starring Gemma Arterton. Despite encouraging reviews, the show closed in the spring of 2015, making way for the West End debut of Broadway hit Kinky Boots, which played from September 2015 - January 2019.

Andrew Lloyd Webber’s Really Useful Group rebranded as LW Theatres (Lloyd Webber Theatres) in 2018, vowing to step up their service and improve the look of their website.

The Broadway transfer of musical Waitress headed into the Adelphi at the beginning of 2019, starring Smash star Katharine McPhee. Following McPhee's run, Eurovision and X Factor star Lucie Jones joined the cast in June, and the show's composer and singing sensation, Sara Bareilles began a limited six-week run in January 2020. Waitress closed prematurely in March due to the COVID-19 pandemic.

The Adelphi Theatre will reopen in 2021 with the London premiere of Back to the Future the Musical.