It’s close to Halloween, and Andy Nyman and Jeremy Dyson’s Ghost Stories is scaring audiences all over again at the Ambassadors Theatre in time for the spooky season. The creepy show first played to tense audiences almost ten years ago, and since then has toured the world and has also been turned into a film.

Walking into the auditorium, I took in the flickering lights, arbitrary numbers scrawled across the walls and hazard tape stuck up chaotically. I wondered if this was just to create an ambience of general creepiness or if it had meaning – do the numbers relate to our seat numbers in some way?! I hoped not, but I knew nothing about the plot itself and was strangely excited about being frightened as I don’t scare easily. 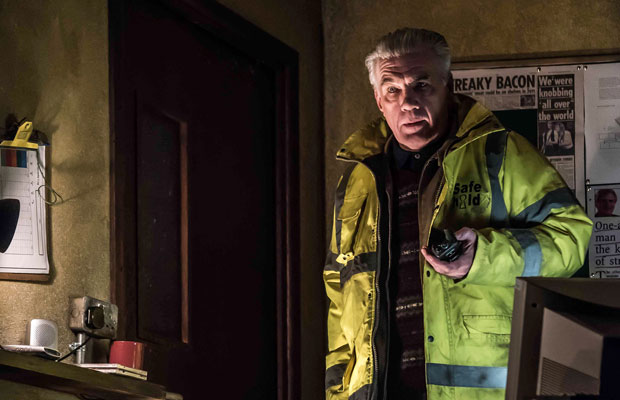 Ghost Stories begins with Simon Lipkin as Professor Goodman – lecturer in parapsychology and promotor of the message that there are no such things as ghosts. He presents three creepy stories to us which use typical horror movie scare tactics – think dolls, creepy babies and monsters – yet although most of us have seen it all before, the way that they’re presented still manages to grip the audience and cause them to squeal from nervousness and shock. Creepy things appear suddenly in the dark, disturbing creatures grow from normal-size to scarily huge, and objects move on their own. Nyman works on all the stage productions by illusionist Derren Brown and it shows – the tricks are executed perfectly to conjure memorable scares on the audience.

The ghost tales themselves take us from a derelict storage facility where a lonely night watchman (Garry Cooper) tries to deal with his guilt and inner demons, to a deserted country road where a terrified teen (Preston Nyman) has broken down in his car, to an arrogant businessman and soon-to-be-dad (Richard Sutton) texting from his upmarket home in Notting Hill. Their stories are swiftly debunked by the sceptical professor, as according to Goodman, the three storytellers are just perceiving their experiences as supernatural encounters because of their own real-life inner demons. But is this the truth?

Directed by the writers themselves along with Sean Holmes, there are unsettling and piercingly-loud sound effects by Nick Manning, special effects by Scott Penrose and spooky lighting design by James Farncombe. The audience was tense, jumping as soon as the show began due to the loud, screeching noises echoing around the theatre, along with the lights switching off to pitch black. There are flickers, sudden blackouts and unexpected clatters keeping everyone on the edge of their seats, and if giggling can be heard during the show, you can be sure it’s of a nervous kind.

Ghost Stories has some great jump scares with tension built up, although I wasn’t as much scared as I was impressed with how clever the show is – the seemingly unlinked stories are tied skilfully together by Nyman and Dyson into a twist ending... Although classic tactics are used which feel a little unoriginal, this probably goes in the show’s favour as it makes the stories appear timeless. And with a final outcome that is so impressive, it will probably be scaring audiences for a long time.