Kunene and the King review - January 2020

Poignant and important, leaves you wondering how much has really changed

South Africa’s problematic history is exposed in Kunene and the King, a sharp new play written by John Kani. Last year marks a quarter of a century since the nation’s first post-apartheid democratic elections, and this insightful two-hander explores the complex relationship between two South African men who have grown up in different worlds within the same country.

John Kani himself portrays Lunga Kunene, a black carer who has been assigned to look after a terminally ill patient. He is friendly but firm, refusing to sleep in the maid’s room upon his arrival. His patient is white actor Jack Morris (Antony Sher) who has been diagnosed with liver cancer just after securing the title role in a production of King Lear. He is crabby and difficult, and snaps when he meets his new nurse who he expects to be female and the same race as himself. Both men are of a similar age but with very little in common, although their conversations begin to unravel some unlikely similarities between the pair. 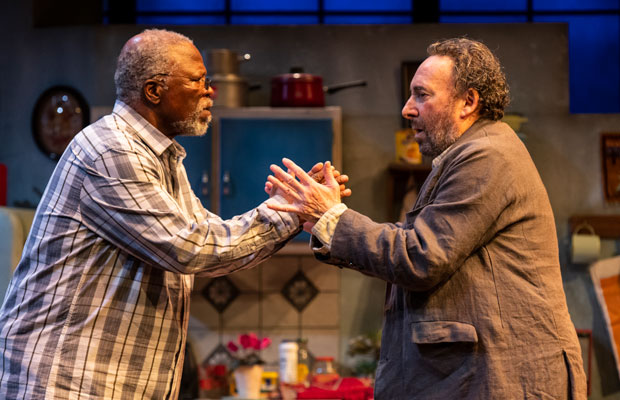 Switching from discussions about Shakespeare to their country’s politics, Morris and Kunene are passionate talkers, albeit about different topics. Morris calls himself an ‘artiste’ who isn’t interested in politics, shrugging off Kunene’s opinions about apartheid-era South Africa with a ‘whatever’ where he can. Kunene, however, tries to break the barrier of his patient’s white privileged attitude. Morris cannot understand how life was so terrible during an era when he had it all, as Kunene explains to him the distressing reasons why he had to give up his own dream of becoming a doctor.

As their discussions interlace between different topics, the relationship between Kunene and Morris weaves in and out of patient and nurse, enemy and friend. They grapple with understanding each other’s points of view in between finding out they have some similarities – from estranged children to a passion for Shakespeare.

There are moments of comedy in this important new play as Morris, dying from cancer of the liver, snatches glugs of liquor hidden in his apartment whenever Kunene’s back is turned. Sher plays Morris with wonderful conviction as he shuffles around the stage in a manner that makes you believe he could keel over and perish at any moment. 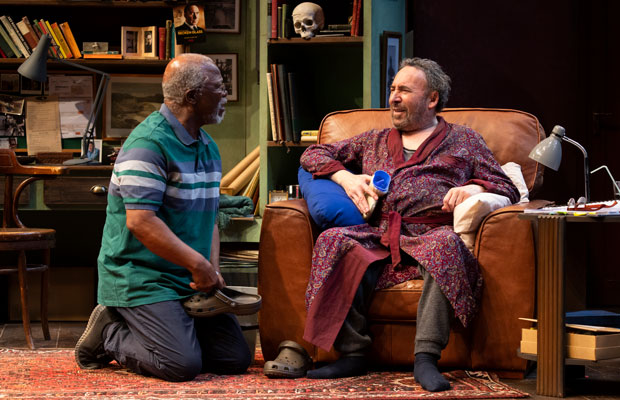 Kani is also excellent, with his acting as brilliant as his writing. He portrays Kunene’s deep resentment well, holding in his anger at the inequalities of his nation and how the injustices of apartheid still affect those today. An unsettling moment comes when Kunene stands face to face with Morris as he flings soiled pants at his face, which shows his continued patience.

An insight into the past and present history of South Africa is explored in Kunene and the King, directed by Janice Honeyman. Poignant and important, it will leave you wondering just how much has really changed.