Whether you’ve seen the classic TV series or not, everyone has heard of The Twilight Zone. The eerie theme tune and title itself have embedded themselves into popular culture to become synonymous with the weird and creepy, and this new stage adaptation by US playwright Anne Washburn certainly retains this sense of the peculiar with updated takes on a selection of stories from the sci-fi anthology series.

The Twilight Zone ran on TV screens from 1959 to 1963 with 156 episodes, and Washburn has adapted eight of these for the Ambassadors Theatre stage written by Rod Sterling, Charles Beaumont and Richard Matheson. The chilling stories ending with an unexpected twist are interlaced throughout the play in fragments, with actors playing different characters in different scenes. Fans of the classic episodes will enjoy the rotating eyeball and E=MC2 cardboard cut-outs that spin their way across the stage, a homage to the famous opening credits of the original show, although this production appeals to anyone with a fascination for the weird and mysterious. 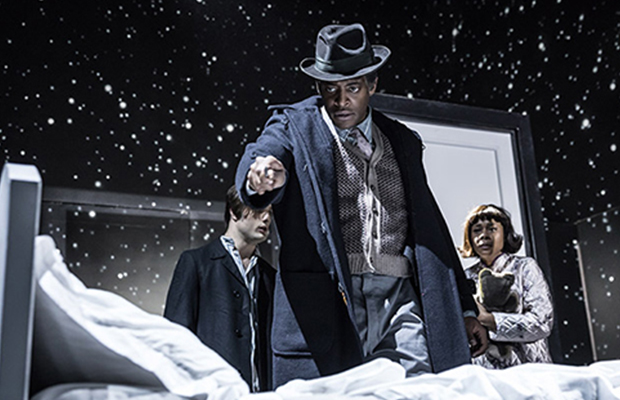 The play starts with a captivating yet strange story about an investigation into an alien stowaway on a bus, and from here on in the first act, the stories get creepier with tales of talking dolls, vanishing children and mummified women, all played out against a dark and star-covered set designed by Paul Steinberg. The actors themselves have been cleverly made to appear in monochrome, a nod to the original black and white series, with lighting by Mimi Jordan Sherin and D.M. Wood, and costumes by Nicky Gillibrand, and the exaggerated wigs and 1950s clothing embrace Americana in a nostalgic way, bringing an element of humour into the Richard Jones’ production. There’s cigarettes appearing suddenly out of nowhere and interrupted monologues, and the cast, which includes Adrianna Bertola, Oliver Alvin-Wilson, Matthew Steer and Alisha Bailey, weave in and out of performing with a comedic twist to a chilling one.

The second half of The Twilight Zone feels less fragmented as stories come to their conclusions. The climax arrives in a scene retold from the episode of ‘The Shelter’ dating from 1961, where a race clash between neighbours disputing over who has the right to take refuge in an available shelter erupts. It feels both out-of-date due to the context of war bunkers and eerily relevant in Trump’s America where American values and national identity have been scrutinised.

The Twilight Zone is a brilliant homage to the classic science fiction series which has influenced the genre ever since it aired. Without it, there would be no Black Mirror, the popular Netflix series which many consider to be a modern take on The Twilight Zone. The London production’s disjointed scenes and nods to classic elements of the show might be confusing for someone not too familiar with it, but if you’re looking to enter a world of suspense where reality comes into question, you’ll enjoy this unpredictable evening.