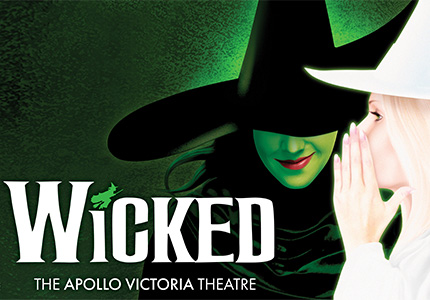 Wicked is the smash-hit musical playing at the Apollo Victoria Theatre, London that delves into the background of the infamous Wicked Witch of the West. Adapted from Gregory Maguire's 1995 novel Wicked: The Life and Times of the Wicked Witch of the West, the musical tells the story of The Wizard of Oz from the point of view of the two witches. Wicked has become one of the world's most successful musicals. With music by Stephen Schwartz and book by Winnie Holzman, Wicked has featured stars such as Kerry Ellis, Idina Menzel, Rachel Tucker and Willemijn Verkaik amongst many others.
Read more
FIND TICKETS
Booking until 26 November 2023
Run time is 2 hours 45 minutes (including an interval)

The Apollo Victoria’s box office is located within the theatre building and is open Monday to Saturday from 10.00am to 7.45pm If you have opted for ticket collection then you can pick up your tickets from the box office on the day of the performance at any time before the show. To collect the tickets you must be the cardholder and you will be required to sign for the tickets. Apollo Victoria Theatre London

Built in 1929, the Apollo Victoria Theatre is one of London's most modern theatres. Located just outside Victoria station, away from the main hub of the West End, the venue was originally designed as a cinema before becoming a theatre after the Second World War. Initial years saw the Apollo Victoria host concerts, ballets and films before musical theatre came in in the 1980's.

Notable productions at the Apollo Victoria Theatre include The Sound of Music (1981-1982), Camelot (1982-1983) and Fiddler on the Roof (1983). In 1984, Andrew Lloyd Webber's innovative musical Starlight Express captured the hearts of audience, running for an impressive 18 years until 2002. Throughout this period of the time, the theatre had race tracks winding throughout the auditorium for actors to skate across.

In 2006, the hugely anticipated Broadway transfer of hit musical Wicked came to the theatre, starring Kerry Ellis in the title role (after original Elphaba, Idina Menzel). Despite its huge success with audiences, the show didn't win any Olivier Awards until 2010, when it won the "Most Popular Show" audience award.

Wicked is one of the highest-grossing pieces of West End Theatre of the last decade. The show is currently in its 13th year and continues to pack out audiences each day, and has previously starred famous faces such as Rachel Tucker, Louise Dearman and Willemijn Verkaik.