The Choir of Man 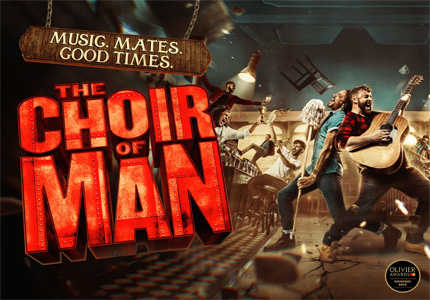 The sell-out, worldwide sensation, The Choir of Man makes its West End premiere at the Arts Theatre. Featuring a thrilling mix of pop song reinventions, world-class tap dancing and poetic meditations on the power of community this is a show that has something for everyone. Paying homage to the cultural institution many have missed over the last 18 months – the pub – don't miss The Choir of Man for a party to end all parties.
Read more
FIND TICKETS
Booking until 28 May 2023
Run time is 90 minutes (without an interval)

The Arts Theatre box office is located within the theatre building on Great Newport Street and is open from 11am – 8pm. Those who are collecting pre booked tickets for a show at the Arts Theatre can do so within the hour before curtain up. Please note that collectors must bring the card on which they made the booking and will be required to sign for the tickets. Visit the official website

Based just around the corner from Leicester Square Tube Station, the Arts Theatre is one of the West End's most intimate venues, often hosting small-scale productions. With a seating capacity of only 350, the 1927 theatre began as a members only club that aired unlicensed performances.

Opening with a revue show called Picnic, the Arts Theatre has housed productions such as the Stokes brothers' Oscar Wilde (1938) and Young Woodley (1928). Both of the latter were sad to be quite controversial, due to themes of sexuality, affairs and underage love. In 1955, the Royal Shakespeare Company's founder, Sir Peter Hall, directed a pivotal production of Waiting for Godot. Hall went on to run the theatre from 1956 to 1959.

Between 1967 and 1999, the Arts Theatre became home to the Unicorn Children's Theatre, whilst hosting plays in the evenings. During this period, Tom Stoppard's Dirty Linen and New-Found-Land ran at the theatre for an accumulative four years.

In more recent years, the Arts Theatre has hosted notable productions such as Seussical (2012 and 2013), The Tailor Made Man (2013) and Storm in a Teacup (2013). The truly terrifying Ghost Stories (2014-2015) followed, with short runs of Bad Jews and Ushers: The Front of House Musical (2015) following. 2015 also saw the West End premiere of smash-hit Green Day musical American Idiot, which ran for an impressive amount of time before embarking on a UK tour.

2016 saw a variety of short-running productions come to the venue, including a Christmas special of The Blues Brothers, Ruby Wax: Sane New World, Gary Sinyor's horrendously reviewed comedy NotMoses, an interactive version of All That Fall, political plays A View from Islington North and children's show Stig of the Dump. Following a UK tour starring Amelia Lily and Newton Faulkner, American Idiot returned to the Arts Theatre for a limited run. 2016 draws to a close with the UK premiere of musical Murder Ballad, starring Kerry Ellis, Ramin Karimloo, Victoria Hamilton-Barritt and Norman Bowman. Finally, the Arts Theatre's 2016 season rounded off with Simon Callow's one-man show A Christmas Carol.

The year rounded off with children's show Guess How Much I Love You and a residency from the ever-popular Mischief Theatre Company with their newest venture Mischief Movie Night. Edinburgh Fringe Festival favourite SIX played limited Monday performances, followed by the arrival of the touring Small Faces tribute show All or Nothing - The Mod Musical.

2018 continued with a revival of Broadway's Ruthless! The Musical, starring Tracie Bennett, followed by new rock musical Knights of the Rose, a return of smash-hit musical SIX and another return of Ian Hislop and Nick Newman's The Wipers Times. Simon Callow's A Christmas Carol also returned for the festive season.

SIX returned to the theatre in January 2019 for an open-ended run. The musical about Henry VIII's six wives has also embarked on a UK tour and premiered on Broadway in February 2020.

The Arts Theatre was forced to shut its doors in March 2020 for 16 months during the Coronavirus pandemic. The theatre reopened in July 2021 with David Mamet's powerful play Oleanna. In late 2021, the global sensation The Choir of Man opened at the theatre, which featured a real, working bar on the stage.

Spring 2022 saw the long-awaited West End premiere of cult musical Bonnie & Clyde for a limited season. Hit comedy Bad Jews returned to the theatre in July 2022, ahead of the return of The Choir of Man from October.