Younger generations may only know The Sun for its Page 3 controversy a few years ago, but there is a riveting backstory to this British newspaper growing from underdog to populist tabloid under the helm of Australian media mogul Rupert Murdoch and editor Larry Lamb. Writer James Graham and director Rupert Goold have turned the origin story of the national daily into a fast-paced drama that, after a sell-out season at the Almeida Theatre, has received a very deserving transfer to the Duke of York's Theatre in the West End.

The play opens with the first meeting between Murdoch (Bertie Carvel) and Lamb (Richard Coyle) in 1969 and follows in their footsteps in the first year of the paper under the new direction, with the ultimate goal to overtake sales of the much more popular Daily Mirror. They assemble a very reluctant team around themselves and rapidly cause a revolution on Fleet Street. Through focusing on what the average lower class citizen is passionate about, including television, which traditionally was seen as a rival to the print press, they rally the masses and gear up to make the impossible possible. 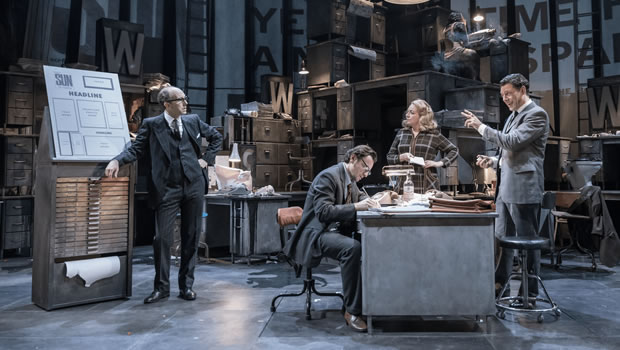 I was only vaguely familiar with the history of The Sun, and the British press in general, and so discovering the origin to Page 3 and the lengths to which Lamb and Murdoch were willing to go to prove themselves were eye-opening. Both came across sympathetic at the start of the journey and while Lamb more noticeably descends into madness into Act 2, Murdoch's ruthless business choices hover on the sidelines too, showing a highly intelligent man who plays Lamb like a ventriloquist doll.

It is hugely captivating to see their dynamics unfold and both Carvel and Coyle are absolutely superb in their respective roles, commanding the stage in each scene they are in. Their intensity is balanced well by the more lighthearted antics from the wider editorial team, most noticeably the sports editor who goes from merely reporting the scores of a match to having to write in-depth features, and the deputy editor who has to put his principles aside to include text printed at a 'scandalous' angle that would never have gotten through copy edits at his previous place of employment.

At 2 hours and 50 minutes in length, Ink is not a short play but not once do you feel that the actors were outstaying their welcome. Both acts are extremely fast-paced, delivering witty and often surprisingly funny dialogue at high speed, whilst rapidly moving the story along and going from one shocker to the next. In this digital age, I didn't think the history of one of Britain's most controversial print publications starting as long ago as the 1960's would have much of a standing, but I was wrong. The debates surrounding The Sun's change in direction are still prevalent today, creating not only a gripping piece of theatre but a thought-provoking one too.