Please note: This review is from the production's run at the Almeida Theatre. The production will transfer to the Duke of York's Theatre in 2021.

Playwright and director Robert Icke has become a darling of the UK theatre scene thanks to his smart adaptations of European classics. His latest effort, The Doctor, is a fast-paced, intellectually challenging affair that dissects ethical arguments with surgical precision.

Arthur Schnitzler’s 1912 work Professor Bernhardi dramatises the fallout after a Jewish doctor refuses a priest access to a young woman dying from an unsafe abortion. In Icke’s adaptation, the titular doctor is now a secular Jewish woman called Ruth Wolff and the fallout is framed as a PR disaster for the Alzheimer’s institution she leads. Cast members frequently play against type - women play men, black actors play white characters, and others remain undefined and therefore open to interpretation. 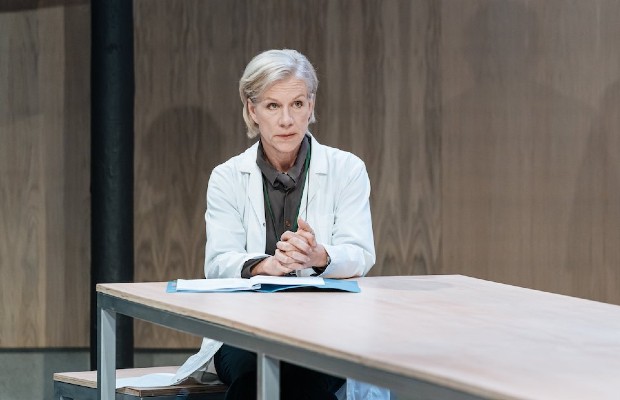 This tangling of identities creates modern resonances in the play’s moral debate. Schnitzler’s original tackles anti-semitism and religion versus science. Icke throws in misogyny, racism, identity politics and social media witch-hunts. In some instances this works, pulling the rug from under our feet and challenging our assumptions about whether identity is born or made. In others, particularly the opening of Act Two, it is in danger of becoming self-satisfied. Theories of race, gender and identity, so often scoffed at in real life, feel undermined by the scene’s Question Time-style setup. This in turn weakens Icke’s argument for nuance in debate.

Nevertheless, Icke is a smart director. As self-serving characters turn on each other - quite literally, thanks to set designer Hildegard Bechtler's stark and clinical design featuring a revolving table at the centre - he rinses out tension, humour and fierce snaps of violence. Flickering lights, freeze-frame moments and live drummer Hannah Ledwidge beating out Tom Gibbons’ score like a pulse all amp up the tension. Despite being such a wordy play, it feels like an edge-of-your-seat thriller. 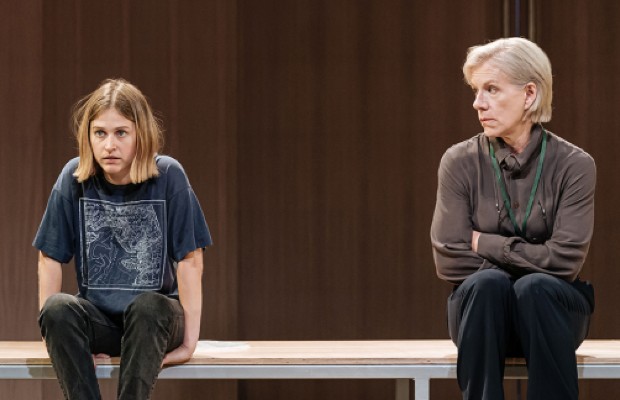 The cast do a fantastic job with this complicated script, especially Ria Zmitrowicz as Woolf’s vulnerable, forthright teenage acquaintance and Naomi Wirther as an opportunistic rival. But ultimately, the play lives or dies by its central performance, and with Juliet Stevenson in the title role, it can’t go far wrong. Her Wolff (or BB - “Big Bad” - to her colleagues) adopts a superior, logical and lofty attitude. Barely leaving the stage throughout the 3 hours running time, Stevenson proves exactly why she is one of our great modern theatre actors. It’s a real treat watching her move from disdainful, resolute and arrogant to a tragic figure brought low by a frenzy of accusations - and her own vulnerabilities.

The Doctor will likely prove divisive, and it’s certain to provoke a flurry of debate regarding Icke’s intentions and the success of its central arguments. But it is without doubt a play that has its eye on modern social politics, delving deep into questions of identity and accountability. If you’re comfortable with getting uncomfortable, The Doctor is one to watch.