A broken family. Mental illness. Teenage depression. Florian Zeller’s The Son is a heart-breaking portrayal of how a painful event can trigger despair, and how those suffering often struggle to understand their own inner demons. It is the third part of a loose trilogy by the French playwright, now showing at The Duke of York’s Theatre for ten weeks after a transfer from the Kiln.

As I entered the auditorium, protagonist Nicolas, portrayed outstandingly by Laurie Kynaston, was already on stage, silently defacing the stark-white walls of the smart living room. Nicolas’s pain is etched on his face like the chaotic marks on the wall as he tries to explain why he refuses to attend school. His depression is unexplainable to himself let alone his divorced parents Anne (Amanda Abbington) and Pierre (John Light), who both present the parental terror of losing grip on a child’s well-being with real and raw emotion. 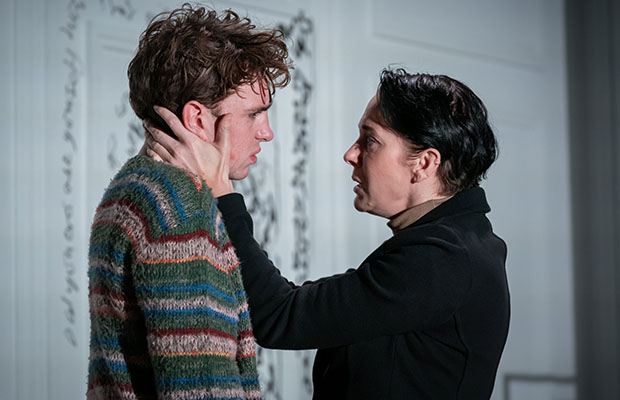 Pierre has fallen in love with another woman and has a new young family, and ex-wife Anne has been left heartbroken, with Nicolas torn between his parents, unable to cope with simply being alive. His depression isn’t analysed by Zeller, just presented as it is, depicting the terrifying way in which it can crumble then destroy a person.

As Nicolas tries to find a solution to his inner turmoil by moving to live with his father, his new partner Sofia (Amaka Okafor) and their little baby, he soon learns that this won’t fix his anxieties, which start to appear in physical ways, from the cuts on his arms to the erratic graffiti he creates. The clearly damaged son moves from his mother’s home to live with his father and his new family in Paris, and the sets by Lizzie Clachan are cleared up and trashed again, to reflect the confusion and anguish the teen goes through, in between short bouts of cheerfulness.

Amaka Okafor as Sofia provides much of the lighter elements to the play, showing that Pierre’s recent happiness was easily found in her.  One such lighter moment appears when the three of them dance to Pharrell Williams’ Happy in their Paris apartment, but this is short-lived as the joyfulness of the moment hits Nicolas and he retreats to his room.

John Light stands out as father Pierre, whose love for his son shines as he struggles to do the best for Nicolas and at the same time juggle a new family. Tension is wrought at one stage where the frustration he feels towards his son comes out in a physical way, as he almost hits his trembling teenage son.

Michael Longhurst’s production is haunting, allowing audiences to delve into the world of depression and suicidal thoughts in its inexplicable way with excellent acting by the cast. By the end of the play, I looked around me at the many people wiping away tears and realised how impossible it felt not to be moved by this harrowing and remarkable portrayal of a lost son trying to find his place in the world.