The Lover / The Collection review - September 2018

A pair of absurd comedies that retain Pinter's air of menace, skilfully brought to life by a talented foursome

Those intent on attending every play in the Pinter at the Pinter season will relish The Lover/The Collection as a very watchable, relatively light and quick-paced pair of comedies, showcasing the playwright’s playful sense of the absurd. This complementary doublet has plenty to say on sex, game playing and bourgeois eccentricity and is performed by a capable ensemble of four. The result is a distillation of pure-Pinter disorientation and hilarity that’s peppered with non-sequiturs and presided over by an ever-present veil of unease.

In The Lover, a husband asks his wife flippantly, “Is your lover coming today?”. His wife replies chirpily that he is, and so ensues a picture of suburban married life that rapidly progresses from unconventional to downright strange. This is the more stylised and distinct of the two plays, helped by a dainty pink set and many a sudden lighting change. Jamie Lloyd’s direction ensures that the audience are held always slightly at arm’s length, his leads just off-kilter, never inhabiting a place of naturalism. Thus the husband and wife are a pair of caricatures, with cut-glass accents and posturing, deliberate movements. 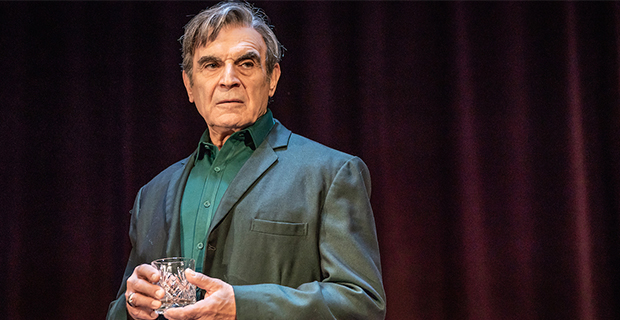 The Collection introduces us to high-society couple Bill and Harry on the day they are interrupted by a stranger called James, who insists Bill has had an affair with his wife Stella. Encompassing themes of jealousy and power play, the second piece of the evening is an example of Pinter’s often inscrutable but engaging relationships. Its set is murkier than The Lover’s, though, failing to give such clear-cut clues to its audience; the decision has been made to use one living room as the home of both couples but it’s not immediately clear that the action is cutting between two places. But there’s a satisfying sense of the surreal and the menacing: the chirpy voice of a stranger on the end of the phone line explaining he’ll be round soon, for example.

The cast seem to be having a great time. In the role of Harry, David Suchet nails comic indignation with a formidable brattishness that is brilliant to watch. Despite being surrounded by talent, he’s the one it’s impossible to take your eyes from. Hayley Squires summons idiosyncratic humour and a gentle breeziness as the wife in both plays, and John MacMillan is a riot as the jealous husband in each instance. Then there’s Russell Tovey, who is all cheeky-chappy flippancy as Bill. Special mention goes to Stella’s obedient white housecat (have cats ever enjoyed such a frequent presence on West End stages as in 2018?).

The Lover/The Collection won’t draw you into existential bafflement to quite the extent of Pinter’s other works, but the succinct pair of plays still retains that absurdist comedy and looming, threatening atmosphere you came for.