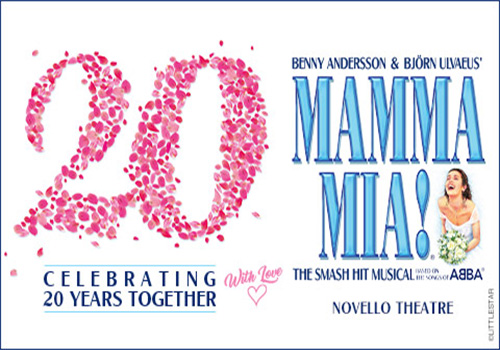 Smash-hit ABBA jukebox musical Mamma Mia! has been entertaining audiences for several years at London's Novello Theatre. Packed full of ABBA classics, such as "Honey, Honey", "Super Trouper", "Voulez-Vous", "Does Your Mother Know", amongst many others! Set on a Greek island, young Sophie prepares for her wedding whilst looking to invite her estranged father to the ceremony. Although Sophie does not know who he is, she does find her mother's diary, which can point her towards three very different men! A fantastically fun tale of love, lust and passion, set to the soundtrack of one of the world's biggest bands, Mamma Mia! is sure to provide the best night out!
Read more
TICKET OFFER
WAS £30.00NOW £25.00
Booking until 30 September 2023
Run time is 2 hours 20 minutes (including an interval)

The Novello Theatre’s box office is located within the theatre building on Aldwych and is open Monday to Saturday from 10am – 8pm. Pre-purchased tickets can be arranged for collection at the box office and may be picked up on the day within the hour before the performance starts. You will need to take both the credit or debt card you paid with and your booking reference number as proof of purchase. You may also require identification Visit the official website

Built by W.G.R. Sprague as a pair alongside the Aldwych Theatre, the building originally opened as the Waldorf Theatre in 1905, before being renamed the Strand Theatre in 1909 and later the Whitney Theatre 1911, before reverting back to the Strand Theatre once more in 1913. In 2005, Delfont Mackintosh renamed the venue the Novello Theatre, in honour of Ivor Novello, who lived above the theatre for almost forty years.

After several successful shows, the Royal Shakespeare Company arrived at the venue in 2005 and remained until 2007, with a brief interlude of Footloose - the Musical (2006), starring Cheryl Baker. RSC productions included Twelfth Night, The Comedy of Errors, A Midsummer Night's Dream, As You Like It, Much Ado About Nothing, Anthony and Cleopatra and The Tempest.

A brief interlude of musicals followed, including The Drowsy Chaperone (2007), Desperately Seeking Susan - A New Musical (2007), featuring music by Blondie and Deborah Harry and starring Emma Williams and Kelly Price. After receiving less than rave reviews, the musical lasted for only eight weeks and was replaced with Shadowlands (2007-2008), which transferred from Wyndham's Theatre.

Since 2012, the Novello Theatre has made its name hosting worldwide ABBA sensation Mamma Mia!, which transferred to the venue from the Prince of Wales Theatre.