"A dazzling spectacle that must be seen to be believed"

When you step into the Old Vic auditorium for the current run of A Christmas Carol, the festive spirit begins at once. The stage thrusts out into the audience, taking over the space, with countless glowing lanterns hanging above. You’re immediately greeted by an usher dressed in full costume, who offers you a mince pie or satsuma as you’re directed to your seat, and soft, traditional Christmas music plays until the house lights go down and the performance begins. The ensemble sweep onto the stage, all dressed in black winter coats and matching top hats, and start the show with beautiful classical bell ringing, after which the immortal opening sentence is said in forceful unison – “Marley was dead: to begin with”.

It’s not long before you’re struck by the innovative simplicity of the set; door frames appear from the stage floor on four sides – accompanied by opening, closing and locking sound effects each time they’re used – and wooden boxes emblazoned with “Scrooge and Marley”, invisible at first, are lifted from the floorboards and are slickly arranged to create chairs, tables and desks. With such basic tools, the cast use their movement and placement cleverly to suspend the audience’s disbelief. The many lanterns hanging from the ceiling come into play, too, acting as dramatic props as well as décor and light sources. 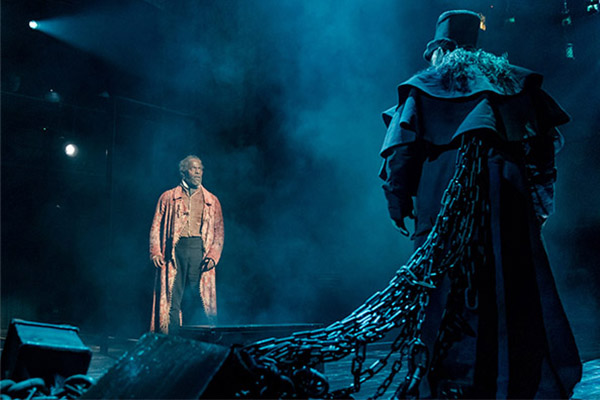 Along with the set, several small but ingenious effects are used throughout. Marley’s ghost, for example, enters dragging his customary chains, but is also pulled out of the auditorium by them, seeming to fly above the ground. In some particularly charming moments, characters having a snowball fight seem to throw thin air, but snow explodes – as if by magic – from whoever’s been hit. Perhaps the most festive moment in the whole show comes when Scrooge suggests moving his nephew’s feast to share it with the Cratchits; without wishing to spoil the magic, it is perhaps one of the most fun, heart-warming moments I have ever had in a theatre.

The costuming in this production is clever, too. Most is traditionally Victorian, with the cast covering their individual character costumes with the aforementioned black coats and hats when acting as a narrative ensemble. Scrooge, however, is dressed in a pink velvet robe, which not only allows him to stand out amongst the cast, but is later subtly matched to the pink patchwork dresses worn by the three ghosts, and a similar scarf given to him by his sister. 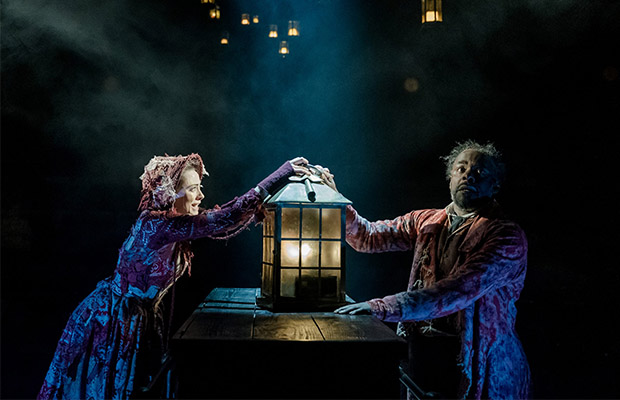 Being a story so frequently adapted, it’s no surprise that Dickens’ original story is often given a minor makeover in places, and Jack Thorne’s script is no different. Unlike what is often the case, though, Thorne’s changes are never for the worse of the story; all are neutral or positive differences. Perhaps the most notable is Scrooge’s encounter with the Ghost of Christmas Yet to Come. In the original novel, Scrooge is greeted only by a silent, Grim Reaper-like figure, who shows him his death being laughed about by fellow businessmen, his possessions being stolen and his untended grave. In Thorne’s version, though, the ghost takes the form of his departed younger sister, Fan, who shows him the love given to him in death that he could’ve had in life, as his nephew, former love Belle and even Bob Cratchit mourn his loss. Whilst a significant departure from the original text, it provides Scrooge with even deeper humanity and provokes true sympathy from the audience.

The Old Vic production has so many physical values that make it a truly divine experience, but the performances within it are just as – if not more – splendid. Paterson Joseph is a truly remarkable Ebenezer Scrooge; he captures both his miserly, bitter qualities and his eventual caring charitableness perfectly, whilst adding a sharp humour and wit unlike any other Scrooge I have seen. He grows effortlessly from a man you can truly despise to one you’d be honoured to share your Christmas table with, and by the end of the show truly sparkles with festive cheer.

In this production, the three familiar ghosts are turned on their heads, shedding their classic images and instead donning gold makeup and pink dresses. Any debate you may have at this change is soon forgotten in the face of three excellent performances from the three women in the roles; Myra McFayden, Gloria Onitiri and Mellisa Allan. All three were more strict and to-the-point with Scrooge than in other adaptations, allowing his performance to sharply contrast theirs but certainly not letting themselves be overshadowing. All three had no time for Ebenezer’s disparaging or questioning and stood strong in their aims, with Allan – as the ghost of his beloved sister – giving the final ghost a warm sense of love on top of her determination.

As Scrooge’s downtrodden employee Bob Cratchit, Steven Miller was heart-achingly pitiful in the presence of his employer, whilst being charmingly fun with his family. Often accompanied by Tiny Tim – played adorably, on this occasion by Rayhaan Kufuor-Gray – the two made a delightful pairing and face of the Cratchit family unit.

Rebecca Trehearn was striking as Scrooge’s spurned lover Belle, truly sassy upon first meeting the young would-be-apprentice, and sweetly caring when the two meet years after their parting. As her father and Scrooge’s undertaker employer Fezziwig, James Standdon was the perfect amount of warm and jolly, and it was a nice directorial touch having him act as an undertaker – although not always Fezziwig – in any scene where one was required. Fred Haig, as Scrooge’s nephew Fred, was delightfully bright-eyed and gently charming, and subtly but perfectly showed his character’s love and respect for his uncle.

The ensemble and smaller roles – made up of all those spoken about above bar Joseph, alongside Kwêsi Edman, Hollie Edwin, Nick Hart, Andrew Langtree, Maria Omakinwa and Samuel Townsend – all gave slick, polished performances. Above all else – and this is true of the entire cast – they seemed to truly be having unbounded levels of fun, and therefore so were the enraptured audience.

Quite unlike anything else I have ever seen, the Old Vic production of this classic tale is a dazzling spectacle that must be seen to be believed, truly worth begging, stealing, or borrowing a ticket for.