Every so often, a show arrives in the West End that is simply heaps of fun. That’s what Drew McOnie’s reworking of his 2016 adaptation of Baz Luhrmann’s Strictly Ballroom is; a sweeping, gaudy, bright and outright hilarious couple of hours of entertainment. Pairing his signature stylish choreography with a range of classic songs, McOnie’s new production is a dazzling affair.

Who will be the Pan Pacifics champion? Scott Hastings has long been in the running, but behind the scenes he prefers to try out his own moves. When he pairs up with the clumsy Fran (played by the unequivocally good Zizi Strallen) and learns to dance from the heart, he sets out to change the face of dance forever. 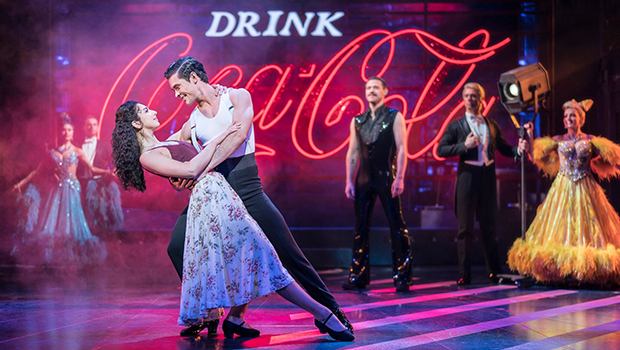 It’s not a revelatory storyline, but if you’re there for a thought-provoking story then you may be at the wrong show. This is a fast-paced two hours of favourite songs and sumptuous dance, led by the surprisingly charismatic Matt Cardle as narrator Wally Strand, whose voice does a lot of justice to tunes such as “Love is in the Air”, “Perhaps Perhaps Perhaps” and “Time After Time”.

Jonny Labey is a striking Scott, combining a brooding temperament with dashing dance moves, whilst Zizi Strallen steals the show as the haphazard Fran, who later blooms into a pro-dancer. There’s gut-wrenchingly hilarious support from Anna Francolini and Stephen Matthews as parents Shirley and Doug, and Lauren Stroud as Liz Holt, who all give physically excellent comedic performances.

Soutra Gilmour and Catherine Martin’s vivid set and costume design evokes the tacky ballroom scene rather magnificently, adding a lot of colour and flair to an already vibrant performance. Throughout the laughs though, McOnie manages to single out the moments of tenderness, helped largely by the sizzling chemistry between Strallen and Labey, particularly in “Time After Time”, whilst the fiery Argentine Tango section, fiercely led by Fernando Mira as Rico, is simply sensational.

It’s not a life-changing show, but it’s more fun than the West End’s current offerings. It may not strictly be ballroom, but it’s sure-fire fun.