"certainly worth the watch"

Glengarry Glen Ross is set over an intense 48 hours in the world of a group of Chicago salesmen who are thrown into a ruthless high-stakes competition against each other. It has been over a decade since its previous West End revival, and David Mamet’s critically acclaimed play returns to the stage at the Playhouse Theatre in a new production directed by Sam Yates and featuring a star-studded cast.

Christian Slater, Robert Glenister, Stanley Townsend and Don Warrington portray the desperate, conniving and corrupt businessmen who will stop at nothing to close the deal to sell the most real estate, even if it involves breaking the law. Without time and luck (and each other) on their side, the top prize of a shiny new Cadillac inches closer as the prospect of the getting laid off appears more probable unless they act fast. 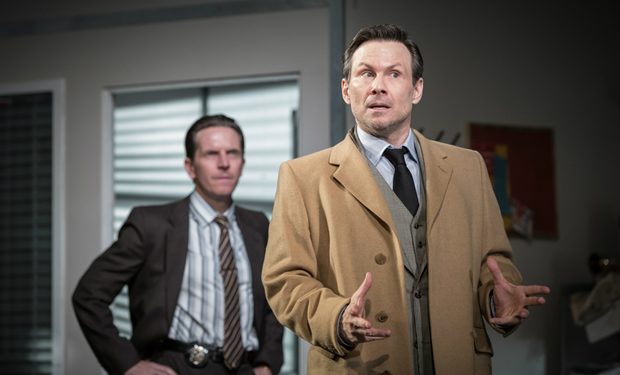 Set in two acts, the first in a quiet Chinese restaurant where plans can be freely murmured away from prying eyes, and the second in their ransacked real estate office where the unforgiving story really begins to unravel, Glengarry Glen Ross is similar in script to the 1992 film starring Al Pacino and Jack Lemmon, as Mamet himself adapted the story for the silver screen. What is missing however, is the part of smooth-talking top salesman Blake played by Alec Baldwin near the start of the film, whose mercilessness mantra of ‘Always Be Closing’ is explained to the slack salesmen with a wild passion that sets the movie-goer up for what’s to come.

However, the desperation amongst the characters is acted superbly by the cast in this revival, and Mamet has retained the sense of scheming mixed with panic in a world where salesmanship can easily leap into misconduct. Roma (Slater) is the callous and selfish opportunist who believes he already owns the Cadillac, Levene (Townsend) is the despairing and ageing salesman with his top-selling glories behind him, and Moss (Glenister) is the talkative, brash bully who snidely sways nervous Aaronow (Warrington) to do his dirty work for him. Kris Marshall is also excellent as unlikable office manager John Williamson, who runs the business but doesn’t quite understand how business works.

The original play was written in 1983 at a time where competitive capitalism was rife, which hasn’t much changed in the consumerist culture we are in now. However when it first opened, it was an all too real look at the cut-throat world of salesmen, and Glengarry Glen Ross won all the major theatre awards going, including the 1983 Olivier Award for Best Play. Time will only tell if it will win the same in its 2017 revival, but if you are a fan of the film or like an intelligent and witty play with a gripping script, it is certainly worth the watch.