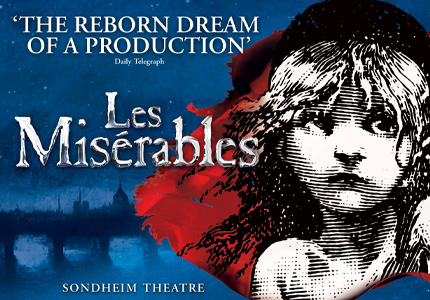 Les Misérables is the smash-hit phenomenon that wows audiences night after night at the Sondheim Theatre, London. A multi-award winning sensation, the musical from Miss Saigon composers Alain Boublil and Claude-Michel Schönberg features astounding show-stoppers such as "I Dreamed a Dream", "On My Own" and "One Day More". Set against the backdrop of the 19th century French revolution, Les Misérables is the timeless tale of love, hope, loss and redemption. Don't miss this West End classic that has played in London for over 30 years.
Read more
FIND TICKETS
Booking until 1 October 2023
Run time is 2 hours 50 minutes (including interval)

The Sondheim Theatre box office is located inside the theatre building on Shaftesbury Avenue and is open Monday to Saturday from 10am to 8pm. Pre-purchased tickets can be arranged for collection from the box office and can be picked up from one hour before the performance starts up until curtain up. You will need the credit or debit card you booked with and you booking reference as proof of purchase. Visit the official website

The Sondheim Theatre originally opened as the Queen's Theatre in 1907, designed by William George Robert Sprague. The extravagant West End venue opened with a comedy called The Sugar Bowl, which ran for a mere 36 performances. Several short run productions followed, and over the years the theatre hosted a number of stars, including Fred Astaire, Kenneth Branagh, Noel Coward, John Gielgud, Michael Redgrave and more.

In 1940, during a successful run of Rebecca, the theatre was destroyed in an air raid that saw the foyer hit by a bomb. Following this, the theatre went dark to undergo repairs and remained closed for almost two decades.

Reopening in 1959 with John Gielgud’s solo performance in Shakespeare Speeches and Sonnets, Ages of Man, the theatre was officially back in action and saw a number of notable productions throughout the rest of the century including Hair (1970’s) and Three Sisters (1990) starring a trio of Redgraves, as well as Stephen Sondheim's Passion, starring Maria Friedman and Michael Ball.

In 2019 the theatre underwent refurbishment, causing Les Miserables to temporarily play at the nearby Gielgud Theatre. The show returned in the refurbished theatre in December 2019, with the 2009 'New' production of the show, which is used on Broadway and tours. The newly refurbished theatre was renamed as the Sondheim Theatre, in honour of the composer and lyricist Stephen Sondheim.

In March 2020 the theatre was forced to close due to the coronavirus pandemic. The theatre reopened for a short time in December 2020 with the acclaimed concert production of Les Miserables. A further spike in COVID-19 cases in the UK caused another period of closure until May 2021 when the concert returned for a 4-month run over summer. The fully-staged production of the acclaimed musical returned in September.