They were right – Ruthless! The Musical is a true laugh-a-minute. Making its London premiere at the shabby-chic Arts Theatre, the off-Broadway smash-hit is the all-female parody of Broadway hits including Gypsy, Mame and All About Eve. It's a super-entertaining night out, but it misses the mark if you're not familiar with the pastiche and references.

Little Tina Denmark will stop at nothing to play the lead in her school play, and with the help of mysterious diva Sylvia St Croix and her house-proud mother Judy Denmark, she's darn right going to get the role. Even with shows such as Matilda and School of Rock, it's nevertheless a thrill to see such a talented youngster in the spotlight. In this performance, Fifi Bloomberg-Khier was a riot; talented to boot with comic timing that matched the best, shouting expletives with a stern face. 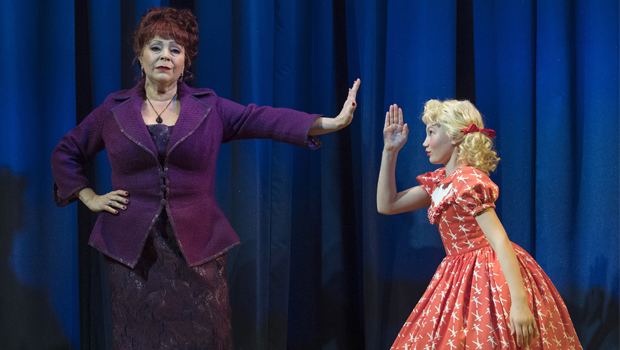 Kim Maresca is simply hilarious as housewife turned diva, reprising her role from the 2015-2016 production. She's delightfully over-the-top, with a voice like silk and expert comic timing. Jason Gardiner is surprisingly good as Sylvia St Croix, a slightly more manic version of Gypsy's Mama Rose. But the star turn comes from the, if not slightly underused, theatre veteran Tracie Bennett as theatre critic Lita Encore, whose character performances simply cannot be matched. Her rendition of “I Hate Musicals” is the 9'o'clock number that steals the show.

The story is relatively predictable, but escalates into complete chaos, which is very funny. Without giving anything away, it's a fast-paced, over dramatic reveal after reveal, peppered with outrageous songs and characterful acting. It's laugh-out-loud throughout, but if you're not aware of the clever references in the lines and melodies, you're probably going to miss a lot.

The production itself suffers from being slightly too long, with a slightly convoluted book and some repetitive numbers. This is no reflection on Richard Fitch's robust direction, which keeps things snappy but eventually shows the flaws in this musical-that-never-quite-made-it. It should be embraced for what it is; a cult classic, and very funny at that. But if I were to be completely ruthless, it’s evident why this has remained off-Broadway.