With five Olivier nominations under its belt, SIX has been at the centre of musical theatre buzz for the last year. Toby Marlow and Lucy Moss’ new musical sees the Tudor queens turn into pop princesses as they compete for the crown of ‘who had it worst’ in this stadium-style pop concert.

“Remember us from your GCSEs?” Catherine of Aragon (Jarneia Richard-Noel) waves to the audience. The six wives of King Henry VIII stand in heeled boots and fishnet tights, striking power poses under Tim Deiling’s purple lights. They are ready to tell their stories, they say, to reclaim them and teach the audience what really happened through an eclectic collection of songs.

The songs are, to be fair, certified bops. There’s a real mixture of genres here. From Catherine Howard’s (Aimie Atkinson) pure pop anthem ‘All You Wanna Do’ to Jane Seymour’s (Natalie Paris) power ballad ‘Heart of Stone’, it’s clear which pop icons have influenced each queen’s musical style. Marlow and Moss employ clever wordplay to scatter in historical vocab such as ‘I look more rad than Lutheranism’ as well as plenty of sexual innuendo. The tunes are catchy, particularly Anne Boleyn’s (Millie O’Connell) Lily Allen-esque number ‘Sorry Not Sorry’. 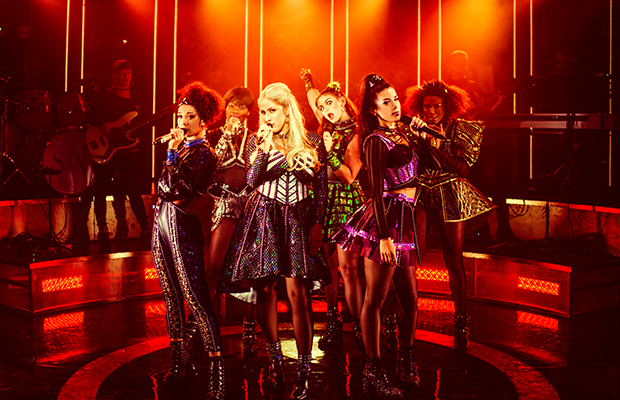 Carrie-Anne Ingrouille’s choreography is sharp and snappy, filling the stage well and full of glorious formations. It’s not unlike what you’d see at a Little Mix concert, particularly when coupled with Gabriella Slade’s costumes. Inspired by Tudor garments, each Queen has a distinctive style and colour, complete with a microphone pouch so they can bust out some more killer dance moves.

Performances from the cast, who have been nominated as a team for the ‘Best Supporting Actress’ Olivier, are full of personality and the ladies ensure the show is an ensemble piece. Alexia Mcintosh has me howling as a sarcastic, no-frills Anna of Cleves and Paris gives an impassioned performance as Jane Seymour. There’s great chemistry between the group, but most of their relationships are generally bitchy, full of eye-rolls and cat fights, and herein lies the issue with SIX.

The premise of competing with the other women is icky, and the ‘scenes’ between the songs come across quite cringey (is there a need for arguments about how many miscarriages you’ve had?). Despite the women saying they want to reclaim their stories, they do a whole lot of talking – and singing - about their relationship with King Henry. The show certainly doesn’t pass the Bechdel test. It’s not until final wife Catherine Parr (Maiya Quansa-Breed), who has been pretty unnoticeable until this point, steps up and tells the other five that they should stop competing and come together as a group instead that the show does what it sets out to do. I’d loved to have heard more about Parr publishing books, or what Aragon did after her divorce, rather than them being an addendum to ‘divorced, beheaded, died’.

Despite the ideological issues of the show, SIX still is a fun night out, full of killer vocals and catchy songs. It’s great to see a new British musical rise up and be nurtured to this standard, and there’s certainly no signs of the show’s crown being snatched any time soon.