"Camaraderie and shared rum amid the blast of distant bombs"

100 years after the end of WWI, Ian Hislop and Nick Newman’s comedy The Wipers Times returns to the West End’s Arts Theatre to cap off its UK tour. This is the muddy, mirthful, based-on-real-life tale of a squad of soldiers stationed in Ypres, Belgium; while bombs fall and German soldiers sing songs of hatred in earshot, they turn their attentions to the creation of a trench newspaper. The play is resolute British good humour incarnate, triumphant in its ability to satirise and subvert in times of adversity.

The publication was printed on a ‘borrowed, not looted’ printing press and contained irreverent articles bemoaning the higher ranked officials alongside poetry and fictional ads. And that strange title? A reference to the British troops’ pronunciation of Ypres. A slice of true life, it lends itself well to the stage, and the decision to include extracts from the paper in the programme is a satisfying touch.

Hislop and Newman’s production is characterised by the cosiness that comes from camaraderie and shared rum amid the blast of distant bombs. The jokes are plentiful and offer nearly as much genuine comedy as groan-worthy puns, with a couple of swipes at the Daily Mail thrown in as a bonus. The prevailing irrepressible chirpiness becomes a little grating after a while, but is ultimately well balanced with the moments of tense fear during shoot outs or the earthy singalongs of the soldiers. There’s a public schoolboy atmosphere: good-natured ribbing in cut glass accents. 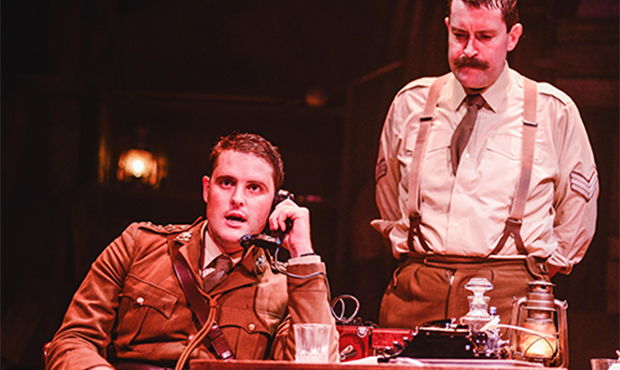 Moments of sadness and horror break through of course - a soldier’s ode to a dead friend, for example, and news of the execution of a spy by firing squad – so that the grim reality of trench warfare is never really so far away. And the piece cleverly plays with ‘going over the top’, letting the audience speculate upon the outcome before revealing the truth.

The dreary brown of the bombed-out building that forms the set is now and then alleviated by bright pop-outs from the newspaper itself. Segments such as "Are you suffering from optimism?" are performed with cartoonish relish, framed by barbed wire momentarily lit up with fairy lights.

A strong cast highlights Sam Ducane as a comedy standout in the role of pompous Lieutenant Colonel Howfield, along with Dan Mersh as booming sergeant Tyler. George Kemp imbues Lieutenant Pearson with a breezy, sardonic charm while James Dutton is an energetic and affable lead as Captain Roberts.

A solid play that entertains but doesn’t quite wow, I have The Wipers Times production to thank for teaching me about an irresistible snippet of wartime history of which I’d have otherwise remained ignorant.