The Taming of the Shrew review - November 2019

A handsome production that falters in its gender-swapped vision

Shakespeare’s notoriously problematic comedy The Taming of the Shrew has inspired debate for centuries thanks to its tale of a man gaslighting his headstrong bride into submission. Now director Justin Audibert brings a new spin to the archetypical “battle of the sexes”, as Elizabethan England is transformed into a narratively underpowered matriarchy.

In the RSC’s staging at the Barbican, men are decorative trophies sitting prettily on cushions at their wives’ feet or coquettishly tossing their hair. The shrewish Katharine, by contrast, is short-haired, hunched, and quietly defiant in Joseph Arkley’s fascinating performance. Coveted by Petruchio and used as a bargaining chip so other women can court his younger brother Bianco (played with mischievously preening abandon by James Cooney), it is strikingly obvious how little space this character is given in the play. 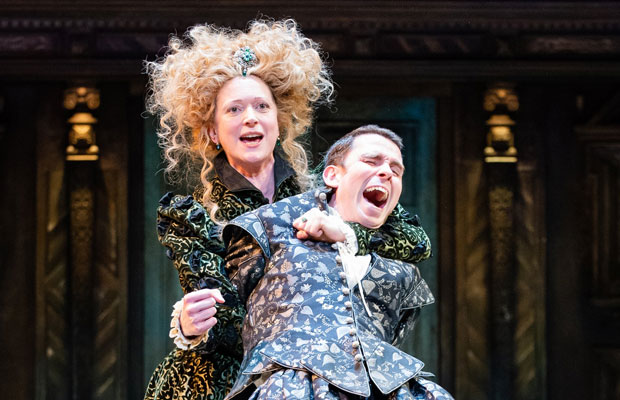 By contrast, the now-female suitors, led by an eccentric then manically domineering Petruchia (Claire Price) burst from the stage in a cacophony of sumptuous dresses, passive-aggressive curtseying and jaunty music. If the success of this interpretation is based on how well the actresses expand into traditionally male roles, it’s a sure-fire hit.

Fittingly, the simple drawing room set has plenty of doors and staircases for physical comedy and sleight of hand, and Ruth Chan’s rock-infused Renaissance music is just merry enough to send up the foolish trappings of courtship as sport – whether it’s Sophie Stanton’s superior Gremia gliding improbably across the stage, Biondella (Amy Trigg) wheeling in and out of scenes at speed to deliver garbled messages, or Trania (Laura Elsworthy) posturing like a salsa dancer when disguised as her lovestruck mistress Lucentia.

Despite delightful performances and some clever choreography to reinterpret Elizabethan dances, Audibert’s production suffers from tonal confusion. Unlike many gender-swapped productions which opt for non-specific time periods and costumes, Shrew retains its period setting and doesn’t associate stereotypical masculinity with dominance, which is an interesting conceit.

However, in practice, there is little sense of how the matriarchy oppresses men, and some regressive stereotypes and behaviours are played for cheap comedy. It is only when Petruchia rids herself of a dress, dons male clothing and isolates Katherine from his family that the dark implications of the play expand; the lighting and sound design become chillier and the direction more stifling. The effect is of a single woman behaving extremely, rather than a cultural attitude of subordination. 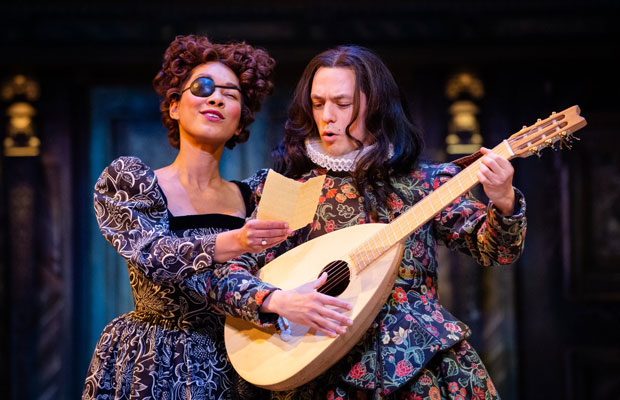 The resolution too is underpowered, as the women gather round to barter over whose husband is most obedient. Katharine’s famous final speech is devastating, hinting at forced submission rather than sparring equals. Some gender-flipped lines land with renewed vigour: “I am ashamed that men are so simple to offer war where they should kneel for peace”.

But ultimately, as Petruchia and Katharine dash from the stage and the cast return for their bows and a jig, the overwhelming sense is of a handsome production that lands its muddled comedy with far more ease than its subversive concept. As a staging of Shakespeare’s classic, this is an entertaining night of theatre; as an experiment in social attitudes and sexism, I was left wanting more.