Following a trend that is becoming all too familiar on the West End, Big: The Musical is the latest ‘based-on-a-film’ show to come along, dredge up some nostalgia for a pop-culture artefact, then promptly sour its memory with a by-the-numbers production that even its performers seem slightly bemused by. Big pushes a moral about keeping a child-like innocence and remembering to have fun, but forgettable songs, off-key performances and an outdated plot ensure fun is hard to find in this outing to the Dominion Theatre.

It starts with a small chorus of kids that desperately needed more rehearsal. That may sound harsh, but shows such as Matilda and Oliver! have proven how delightful a talented chorus of youngsters can be. This gang are out of tune and out of their depth. They almost make up for it with their enthusiasm, though, so we give them points for trying. 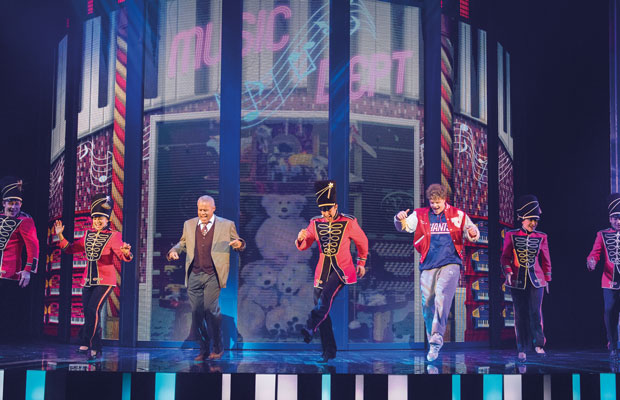 The same can be said of the show’s star, Jay McGuinness, who really does try, bless him, to inject this show with some of his own undeniable charm. Stepping into the ‘big’ shoes of Tom Hanks as Josh Baskin, the boy who suddenly finds himself in an adult body after a fateful trip to the fair, McGuinness gives a warm and goofy performance that makes him hard to dislike, even if his vocal powers are not up to the task of filling the Dominion’s large auditorium. He gets plenty of chance to show off the kind of moves that made him a winner on Strictly Come Dancing, the most memorable example being a recreation of the film’s famous giant piano scene. This iconic moment brings some smiles despite the colour changes of the projected keyboard being slightly out-of-time.

McGuinness is joined by Girls Aloud’s Kimberly Walsh as Susan Lawrence, a thirty-something executive working for the toy company Josh finds himself working in. The pair share terrific chemistry, but that only exacerbates the core problem with the plot. This is a romance between a thirteen-year-old boy and a grown woman. The discomfort of this concept never leaves you. I heard multiple, audible groans from around the auditorium during each gawky “romance” scene. It’s 2019 now, not 1988 and without a re-write – I cannot see contemporary audiences being won over by the problematic relationship at the core of this story.

If the show had some great tunes it might be easier to forgive, but I’ve forgotten every single one. There are none of the earworms or power ballads that linger in the memory from better shows. The songs are both unremarkable and annoyingly frequent. This story would have been better served with more scenes of physical comedy and amusing dialogue, but these drab songs make up the bulk of the run-time. To exacerbate the issue, so many of the cast were singing off-key that I wonder if there were technical issues with the feedback loop. The orchestra had decent oomph, but it was as if they were spilling over from a different show. 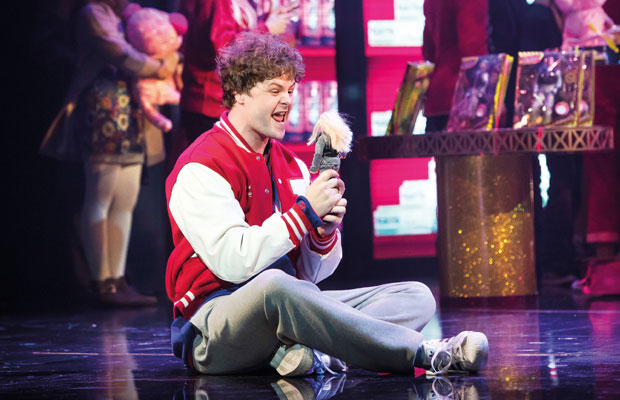 The production itself is dominated by a large revolving cylinder of AV screens, following that irritating trend of replacing well-designed backdrops with projections that look mostly out-of-place. Sometimes the screens and physical sets marry incredibly well, such as in a swank office-party scene toward the end of the first act, but much of the time they distract from rather than compliment the overall mise en scène. I have to mention a personal gripe here too; for a show set in 1988, it’s unforgivable to feature Ninja Turtles masks and a bedspread that is clearly from the 2012 Nickelodeon series, not to mention a giant Star Wars stormtrooper toy plucked straight from 2017’s The Last Jedi. Naughty production designers!

Big: The Musical is inessential viewing. Disturbing at its worst and underwhelming at its best. Jay McGuinness and Kimberly Walsh show some talent and try their hardest to salvage this relic. I left hoping that a chance will arise to see them together again in a better show.