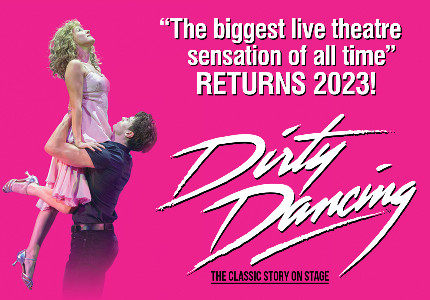 Dirty Dancing returns to the Dominion Theatre in 2023 after a smash-hit season earlier this year. Featuring all of the biggest hits from the iconic 1987 film, the musical is a huge crowd-pleaser guaranteed to give audiences the time of their lives. Critics have hailed the musical as ‘the biggest live theatre sensation of all time’ (The Observer), so don’t miss Dirty Dancing – The Classic Story on Stage as it returns to London.
Read more
FIND TICKETS
Booking until 29 April 2023
Run time is 2 hours 10 minutes (including an interval) 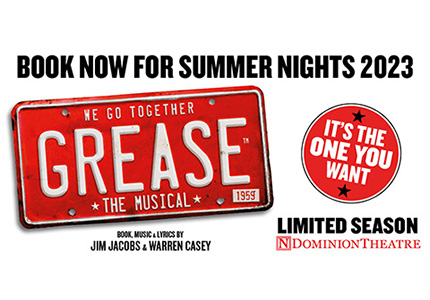 Grease the Musical returns to the Dominion Theatre after a blockbuster run in 2022, directed by Nikolai Foster and choreographed by Arlene Phillips. Packed with hits including "You're The One That I Want", "Summer Nights" and "Greased Lightnin'", Grease the Musical is sure to be a hot ticket in 2023.
Read more
FIND TICKETS
Booking from 2 June 2023 until 28 October 2023
Run time is 2 hours 30 minutes (including an interval)

The Dominion Theatre’s box office is located within the theatre building on Tottenham Court Road and is open from 10am – 7.45pm on Monday to Saturday Pre-purchased tickets can be arranged for collection at the theatre’s box office an hour before the show starts. If you plan to collect your ticket you will need the card you used to make your purchase along with your booking reference. Dominion Theatre London

Built on the site of a former Leper Hospital and the Meux Brewery, which saw eight people die in a beer flood, the Dominion Theatre has some rather grave roots and is said to be haunted to this day! In the 1930's the venue was used as a cinema, screening films such as The Phantom of The Opera, The Sound of Music and West Side Story right up until the 1980’s, where is began to house large live musicals.

The Dominion Theatre has also hosted the prestigious Royal Variety Performance on four separate occasions, and has been regularly used for the Hillsong Sunday Service since 2005.

In 2002, the venue finally made its name, hosting the unprecedented smash-hit success of Queen's musical We Will Rock You, which played at the theatre for an impressive twelve years until 2014. Following the musical's closure, a disappointingly brief revival of Evita (2014) played, before embarking on a UK tour. Irving Berlin's White Christmas played until the end of 2014.

2015 saw a range of eclectic productions pass through the theatre, including Frozen Sing-Along, Aliens Love Underpants, Lord of the Dance: Dangerous Games and Elf! The Musical (2015-2016), starring Ben Forster and Kimberley Walsh.

2016 productions included Jeff Wayne's The War of the Worlds and The Bodyguard, starring pop superstar Beverley Knight. Broadway musical An American in Paris transferred to the Dominion Theatre in March 2017, featuring music by George and Ira Gershwin and earned five-star reviews from critics. Closing in January 2018, the venue later saw a strictly limited season of Shen Yun arrive.

Jim Steinman's Bat Out of Hell the Musical (2018) arrived at the Dominion Theatre and closed in 2019.

The Dominion has undergone renovations for most of 2019, opening again with a musical adaptation of 80s movie BIG in September. Classic musical White Christmas played at the venue over the festive period.

In 2020, DreamWorks animated classic The Prince of Egypt was revived as a stage musical. In March 2020 the theatre was closed due to the COVID-19 pandemic. The Dominion Theatre will reopen in December with a staged concert production of the musical A Christmas Carol, starring Brian Conley.

The Prince of Egypt returned to the Dominion Theatre in July 2021 before closing permanently in early 2022. A revival of Dirty Dancing transferred to the Dominion in January following a hugely successful UK tour, before a major new production of the classic musical Grease played a five-month run at the venue.

The big-hearted festive show Elf the Musical returned to the Dominion over the Christmas period in 2022, with Dirty Dancing and Grease both playing another limited season in 2023,