Hayley Atwell of Captain America and Agent Carter fame and Tom Burke, best-known for the titular role in BBC's Strike are starring in a new adaptation of Ibsen’s Romersholm. The play is considered by many to be the best play by the nineteenth century Norwegian playwright who is often credited with inventing realism.

The story focuses on Rosmerholm, the ancestral home of Rosmer, the latest in a dynasty of wealthy clergymen. He lives alone there with the passionate Rebecca, the former companion to his late wife who committed suicide a year before, and with whom it becomes evident Rosmer has a close relationship.

The story takes place on the eve of an important local election, where the incumbent conservative governor – and Rosmer’s late wife’s brother – may be ousted by working class voters in search of a fairer society. The governor expects his support, but things aren’t so simple: Rosmer has experienced a crisis in his faith, and in his former conservative politics. Both sides vie for Rosmer’s public support owing to his influential position in the community, meaning he could decide an election that could be a harbinger of change across the country. 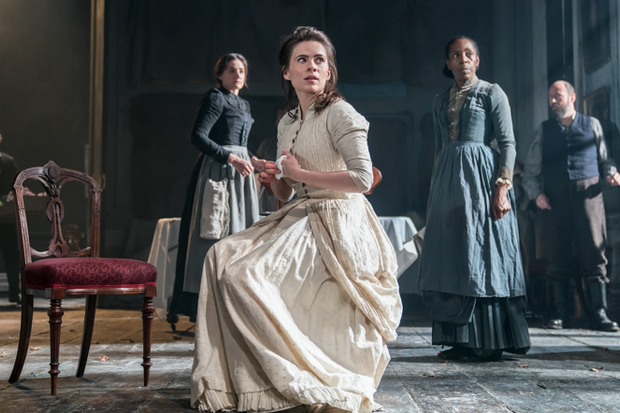 Things spiral out of control, with Rosmer’s reputation in the balance as members of both sides are appalled by Rosmer’s loss of faith. Questions are raised around morality in the absence of religion, in particular with regard to the atheistic left-wing Rebecca. Is Rebecca manipulating a suggestible Rosmer for her own ends? Did she go so far as to cause the death of Rosmer's first wife? Was she politically motivated, or did she wish to install herself as the mistress of Romersholm? Or is she innocent? Political and romantic tension are married as Rosmer searches for answers.

Duncan Macmillan’s adaptation feels timely. Political ideas that are highly relevant in the current climate are addressed in a manner that is incisive and sophisticated without being stuffy or too wordy. This is at least in part owing to the passion with which characters such as Rebecca pursue their causes. Despite what they say in the play, politics feels personal. Atwell and Burke are captivating leads, giving a sense of immediacy to the political narrative, all the while mingled with the characters’ passion for each other.

Moreover, it was satisfying to see in Rebecca a female character with passion, not only for a man, but for a cause, and the tension between these being explored. Whether she has acted immorally or not her character is rich and engrossing, a female character you can really sink your teeth into.

The drama of Rebecca and Rosmer’s passionate, conflicted relationship is tempered by political currents, and their urgency. Ibsen’s questions about where society is heading feel just as relevant today, and Burke and Atwell come together to make Romersholm a compelling watch.