Woven with pain, but a delight to listen to

An orange glow dimly lights the Gielgud stage as we’re transported back to a 1934 boarding house in the town of Duluth, Minnesota. Duluth also happens to be the birthplace of Bob Dylan, whose discography provides the soundtrack to this poignant Depression-era tale.

First seen at the Old Vic in 2017, Girl from the North Country has since crossed the pond to Broadway and Toronto and now has a temporary home in the West End. Written and directed by Conor McPherson originally and in this revival, we’re introduced to many characters who are residing in the guest house and we catch snippets of their stories as they weave in and out of it, all whilst staying under the same roof.
There’s owner Nick (Donald Sage Mackay) who is having money troubles, his wife Elizabeth (Katie Brayben) who has dementia, and their pregnant and adopted black daughter Marianne (Gloria Obianyo) who is consistently offered hand in marriage from a seventy-year-old man.
Surrounding this central group is falsely-accused boxer Joe Scott (Shaq Taylor), narrator Dr Walker (Fredy Roberts) and Nick’s lover, Mrs Nielsen (Rachel John), plus an ensemble of other characters. 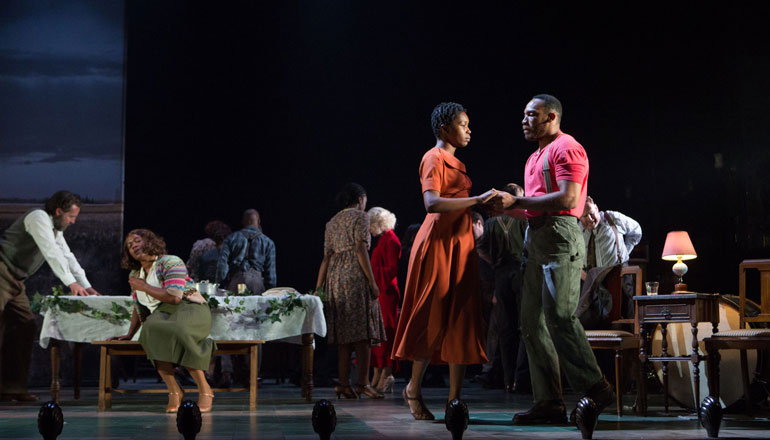 All of them carry the weight of regret or have something they’re hiding, and some of their stories have touching and occasionally comical moments. However, the main flaw here is a certain unevenness in the plot, which can sometimes make it hard to follow. Narratives aside, the real beauty of Girl from the North Country is without a doubt the music which sees some incredible performances from the cast.

There is a sense of melancholy in the way that Dylan’s songs are sung from the troubled characters. With carefully selected tracks dating from 1963 to 2012, the music is played on 1930s instruments as the actors pluck and strum, step into microphones and harmonise with enough magnetism to make the hairs on the back of your neck stand up. There’s a couple of familiar songs to those who might not be so acquainted with Bob Dylan’s music, with Brayben performing Like A Rolling Stone in a way I’ve never heard before. One of the highlights comes when Obianyo sings Tight Connection To My Heart, with her beautiful tone and terribly forlorn expression making you want to simply weep. 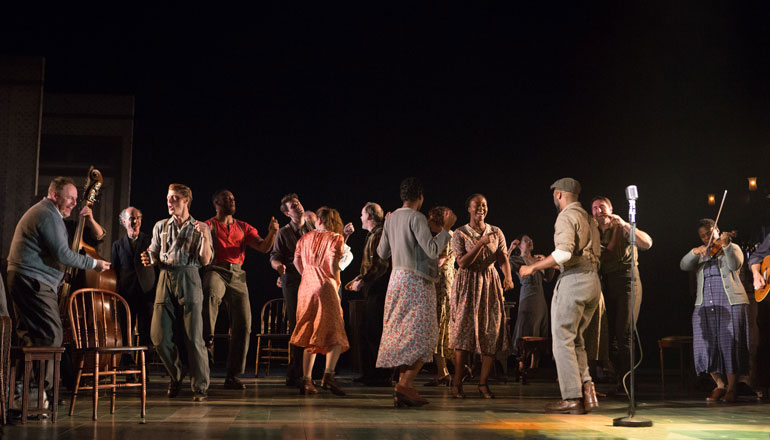 From racism to mental illness, death to unwanted proposals, Girl from the North Country is woven with pain but is a delight to listen to. The talented cast and beautiful music hold the show together, and the only shame is that just as you start to connect with one story, it is swiftly moved onto the next.

With atmospheric lighting by Mark Henderson, breath-taking set design by Rae Smith, and onstage musicians who accompany the actors perfectly, Girl from the North Country is primarily about the music and performances from the cast, which will leave you feeling emotional and impressed.