“A slick revival full of tech trickery, at the expense of a little of the original story’s charm”

The original, 1950s All About Eve is a film that pays homage to the theatre; Ivo van Hove's stage adaptation of All About Eve is a play that pays homage to film. In the latter, cameramen stalk the stage, recording live footage which is beamed out on screens above the set. There are close-ups, and juxtaposed scenes, and there is cinematic trickery. It is possible to see what’s going on in several rooms at once, giving you, the spectator, the privilege of omnipresence.

The story of rivalry between Broadway actresses does seem ripe for revival. Parts for older women are sparse, women are held to unattainable standards of youthfulness, understudies struggle for the chance to prove their worth, and men in positions of power exploits the dreams of hopeful women. All of these themes are given breathing space under van Hove’s direction. The play is loyal to the original script which is full of killer lines, invariably delivered by the witty Margo. Slight tweaks cut out the rattled-off lists of movie stars and playwrights of the 50s who’d be less recognisable now, and the actresses’ ages have been changed. 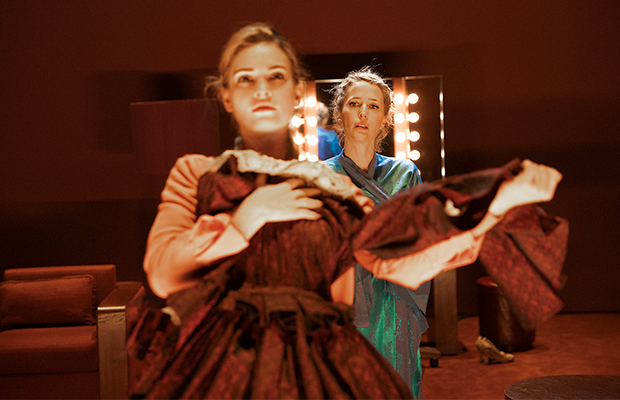 Jan Versweyveld’s astonishing set creates a halfway space that’s part backstage at the theatre and part Margo’s lavish home. Partitions rise and fall but a bulb-framed dressing table - like an altar – remains constant. The screen-and-stage set up means there’s lots going on at once, which gives a busy overview and packs a dense story into a two-hour running time. It's not so much the Margo show as in the film, but a giddy house party that zooms in to every character.

Pleasingly, the characters differ to their film versions. Gillian Anderson is formidable and haughty rather than petulant and outrageous like Bette Davis, the star of the 50s film. Sheila Reid is a sweet and twinkly-eyed Birdie, unlike her stony-faced film counterpart. Lily James’ Eve is full of childish energy which slowly reveals itself to be cutthroat ambition.

Monica Dolan is effervescent, a show stealer, as Margo’s best friend Karen Richards. As the narrator of the story, she underpins the whole thing, and her down-to-earth humour is utterly winsome.

All About Eve replaces the Margo-centric playful glamour of the film with a slick modernity. This is Ivo van Hove with his box of tricks wide open, but at the expense of a little of the charm and warmth of its predecessor.