Following a sell-out season at the Young Vic Theatre, James Graham’s critically-acclaimed play Best of Enemies transfers to the West End. Dramatising the fierce political TV debates between the conservative William F Buckley Jr (David Harewood) and the liberal Gore Vidal (Zachary Quinto) as they fight to become the next President of the United States. The play examines how this fight for power marked a landmark shift in the American political landscape. Directed by Jeremy Herrin, Best of Enemies plays a limited season at the Noel Coward Theatre from November 2022.
Read more
TICKET OFFER
No Booking Fee!!
Booking until 18 February 2023
Run time is 2 hours 30 minutes (including an interval)

The Great British Bake Off Musical 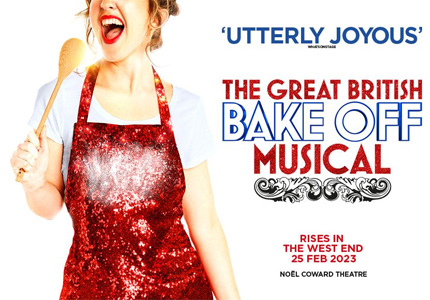 Fans of soggy bottoms, scrumptious bakes and coveted Hollywood Handshakes will enjoy this brand new musical based on the nation’s favourite TV show. This Star Bake show features 16 brand new songs and a touching story of friendship, love and laughter in the tent. The Great British Bake Off Musical is the cherry on top of the West End cake, opening for just 12 weeks at the Noël Coward Theatre.
Read more
TICKET OFFER
No Booking Fee!!
Booking from 25 February 2023 until 13 May 2023
Run time is 2 hours 5 minutes (including an interval) 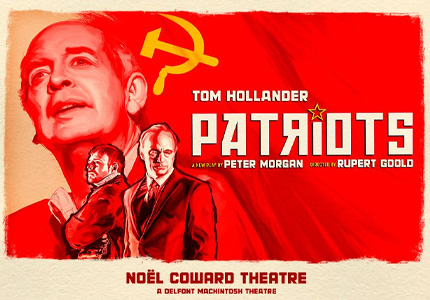 BAFTA Award-winning actor Tom Hollander stars as Russian billionaire Boris Berezovsky in The Crown creator Peter Morgan’s gripping new play Patriots, set in the world of 1990s post-Soviet Russia. Familiar figures including Vladimir Putin and Roman Abramovich populate this acerbic, edge-of-your-seat drama about the rise of despotism, oligarchs and kingmakers. The play transfers from a sell-out premiere at the Almeida Theatre to the Noël Coward Theatre in 2023, for a strictly limited season.
Read more
FIND TICKETS
Booking from 26 May 2023 until 19 August 2023

The Noel Coward Theatre box office is located within the theatre building and is open from 10am – 7.45pm Monday to Saturday. Pre-purchased tickets can be collected from the theatre’s box office in the hour before the performance is due to start. Customers will need to bring the card they used to make the purchase as well as their booking reference. Noel Coward Theatre London

Originally dubbed the New Theatre, the venue was built by Sir Charles Wyndham as a pair with Wyndham's Theatre and first opened in 1903, with a production of Rosemary starring Charles Wyndham and his wife, Mary Moore. Early years saw the theatre host a range of dramatic texts, including Coward's first play I'll Leave it to You (1920) and George Bernard Shaw's St. Joan (1924).

Throughout the 1930's John Gielgud's prolific career was launched at the New Theatre, starring in and directing plays including Richard of Bordeaux (1933) and Romeo and Juliet. During the Second World War, surrounding theatres were affected by the Blitz, with the Old Vic and Sadler's Wells in-house companies seeking refuge at the New Theatre, making it their home until the 1950's.

One of the theatre's most successful productions was Lionel Bart's musical Oliver! (1960), which played for an impressive 2,618 performances. Further notable productions included London Assurance (1972), starring Judi Dench, the Olivier Award-winning Children of a Lesser God (1981) and A Month in the Country (1994), starring Helen Mirren and John Hurt.

During the 2000's, a range of productions passed through the theatre, including Endgame (2004), starring Michael Gambon and Lee Evans, Suddenly Last Summer (2004), starring Diana Rigg and an Indian production of Twelfth Night, which played to packed-out audiences, before the Royal Shakespeare Company moved in with their season, including Hamlet, Romeo and Juliet, Macbeth, King Lear and Hecuba (2004-2005), starring Vanessa Redgrave.

After a three-month dark period, the theatre was bought by Delfont Mackintosh, opening with flop Ducktastic! (2005). Following productions featured Harold Pinter's Celebration (2005), A Christmas Carol (2005), starring Patrick Stewart and Blackbird (2006). In 2006, award-winning Broadway musical Avenue Q transferred to the theatre, playing for three years before transferring to the Gielgud Theatre.

After this hugely acclaimed season, popular musical The Full Monty (2014) sashayed into the venue, followed by Imelda Staunton in Good People (2014) and a year-long run of Tom Stoppard's Shakespeare in Love (2014-2015), an RSC transfer of Death of a Salesman (2015), starring Anthony Sher, and magic show Impossible (2015), which wowed audiences with its mind-blowing tricks.

After announcing closure in October 2017, Half a Sixpence was replaced by James Graham's latest political comedy Labour of Love, starring Martin Freeman and Sarah Lancashire.

2018 opened with a transfer production of the Old Vic's critically acclaimed Bob Dylan musical Girl From the North Country, followed by another transfer of Chichester Festival Theatre's Quiz, by James Graham. The Michael Grandage Company also bring a new season to the stage in 2018, with the Noel Coward Theatre hosting Aidan Turner in Martin McDonagh's The Lieutenant of Inishmore. The Young Vic's popular two-parter The Inheritance arrived at the theatre at the end of 2018.

The theatre closed in March 2020 in response to the COVID-19 pandemic and remained closed until July 2021. The theatre reopened with performances of comedy show The Comeback. Popstar Lily Allen made her West End debut in the premiere of spooky new play 2:22 A Ghost Story.

Broadway musical Dear Evan Hansen returned to the theatre in October 2021, and closed in October 2022. It was succeeded by a West End transfer of acclaimed play Best of Enemies, starring Zachary Quinto and David Harewood. In 2023, the theatre will welcome The Great British Bake Off Musical and Patriots starring Tom Hollander.

The Lieutenant of Inishmore
(closed 8 Sep 2018)