A complicated portrait of mental health

Anxiety. Suicide. Abandoned children. Dear Evan Hansen packs in as many bleak subjects as in can in two hours, and even though at times it feels like emotional manipulation on the audience, it’s easy to see why this musical for the social media age has been such a hit on Broadway since it opened in 2016.

Directed by Michael Greif with the book by Steven Levenson, it tells the story of Evan Hansen, a high school senior suffering from social anxiety, encouraged by his therapist to write letters to himself to help him work out his troubled mind. When fellow loner Connor Murphy (Doug Colling) finds one of these letters shortly before killing himself, Evan finds himself fabricating a friendship with the dead boy, delving deeper and deeper into a web of lies. 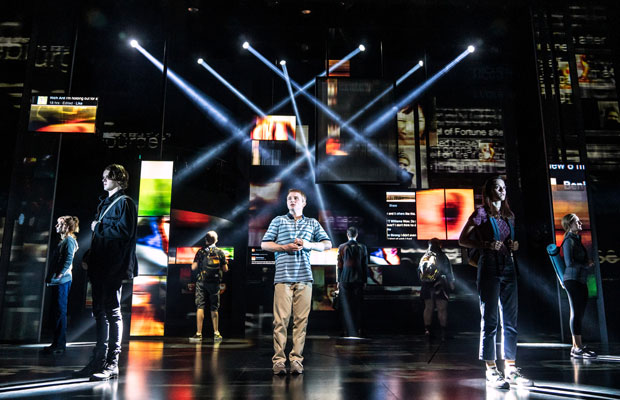 Sam Tutty marks his West End debut in the role of Evan, capturing the teen’s intense loneliness through his nervous and quivering disposition. Paradoxically, he manages to tell his spiralling lies with so much conviction that Connor’s family welcome him into their lives, uncomfortably replacing their lost son with him. Evan’s dishonesties about his friendship with Connor go viral in the form filmed speech about their invented bond, and his lies slip out of his grasp.

Lucy Anderson shines in her role as Evan’s love interest Zoe Murphy, conveying brilliantly the part of the remorseful sister who resents her dead brother. Rebecca McKinnis as Evan’s absent mother has strong moments, excelling towards the end of the show with a hasty transformation, and Rupert Young as Connor’s father – who seemed bland and devoid of emotion at first – captures the intense grief of losing a child in an unexpected moment.

The design by David Korins and Peter Nigrini displays a traffic of social media activity across tall sliding screens. Real-life is happening on stage, but it’s hard not to pay attention to the Instagram updates and Tweets that scroll down the thin, translucent screens, reminding us that in this age, the lines are easily blurred between what’s real and what’s fake, and whatever we put out there can be displayed for all.

The songs by Benj Pasek and Justin Paul come with some awkward key changes and there aren’t many uplifting moments in the ballad-heavy score. The closing song to Act One however, ‘You Will Be Found’, is the inspiring song the production needs, and has been turned into a hashtag that dons the poster artwork, used to promote mental health awareness. 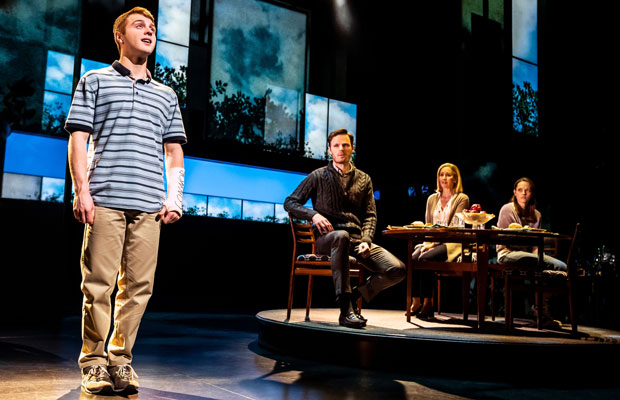 Dear Evan Hansen is a complicated portrait of mental health woven with the pains and pressures of social media, and is emotional to watch with some excellent moments, expertly executed by the cast and creative team. Although the swift conclusion implies that Evan’s actions have had minor consequences, it reaches out to connect to the lonely and its impact is heard with the sobs coming from the audience. Emotional and raw, this sensitive musical has flaws but is important and relevant to today’s audiences.