"You can't help but smile and have a great time"

It’s hard to comprehend that this month marks the 20th anniversary of the musical Mamma Mia! – a show that continues to resonate with audiences of all ages. And it still remains one of the very few ‘jukebox’ musicals that is actually good. The story and songs flow as if they were written for the story, and unlike other shows, there’s also no mention of the original band.

Sophie (Charlotte O’Rourke) is getting married and she wants her father to be there. The problem is – she doesn’t know who he is. Neither does her mother Donna (Caroline Deverill). With three possible options, Sophie invites them all, expecting to know her father straightaway. But when they all turn up, memories and feelings are stirred with unexpected results…

There’s no denying that this is a great show: the singing and dance numbers are almost without fault, but the acting was a little disappointing. O’Rourke has a lovely singing voice, but rushed her lines and lost a lot of the comedy; there was also very little believable chemistry between her and Sky (Alec Porter). Others struggled to maintain their accents and a lot of the actors seemed to over pronounce their vowels, making it feel in places like a GCSE performance. 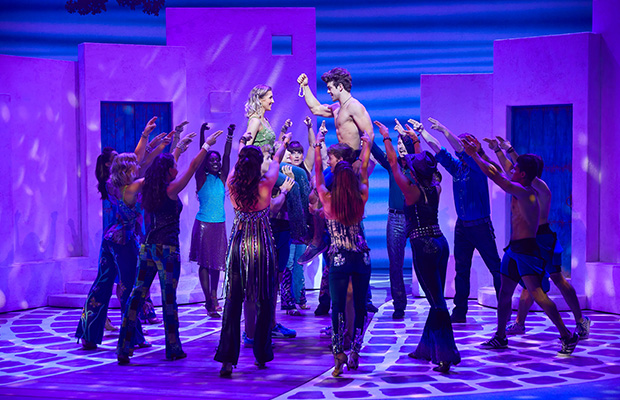 However, Deverill is an excellent Donna. Her emotional performance really captured the essence of who Donna is and her singing is excellent. In fact, the three older friends are all fantastic and it is the younger cast members who let the production down.

The last time I saw the show I felt that the set was a bit dated; this time I thought the same, but did notice a few updates to the show. Additional songs have crept in and the girls at the hen party no longer wear trainers (a bit unrealistic), but heels.

The thing with Mamma Mia! though is that no matter how hard you try, you can’t help but smile and have a great time. That’s the beauty of ABBA: the catchy songs make you want to dance, while the emotive ones tug on your heartstrings. Twenty years later and this show really does to continue to delight audiences, bringing them to their feet to join in the finale. It’s not perfect, but so what – we still love it!