"Both entertaining and a little irksome" 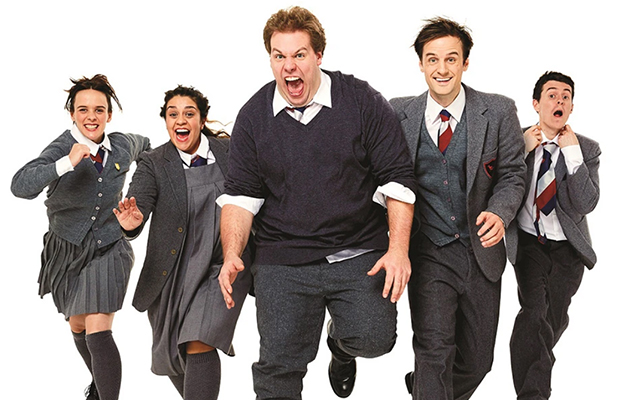 It can be irritating watching grown men and women portraying little children, and the latest offering from Mischief Theatre is unfortunately no exception. The company that brought us hilarious gems such as The Play That Goes Wrong and The Comedy about a Bank Robbery are back with a residency at The Vaudeville Theatre about a mismatched group of children growing up together. We see them sprout from unruly kids, to typical teenagers, through to young adults at a school reunion, and although each act becomes stronger as they become older, the show fails to pack in as many laughs as their other offerings, and feels quite predictable at times.

Written by Henry Lewis, Jonathan Sayer and Henry Shields, who also star in the show alongside Nancy Zamit, Dave Hearn, Charlie Russell and Bryony Corrigan, Groan Ups begins with a pair of teachers speaking to the audience – the school pupils. The show then kicks off with Lewis, Sayer, Zamit, Hearn and Russell jostling onto the stage as part of a year 2 class, donning juvenile outfits. The adults play a group of naughty 6-year-olds, which at first seems childish in an uncomfortable way until you get used to it. There was toilet humour along with a few laugh-out-loud moments, but I was expecting to find it funnier than I did.

Halfway through the first act the same actors become bullying, boisterous and sexually curious teens, which solidifies the characters and ties together elements from the first scene. There are games of ‘spin the bottle’, a few wandering hands and pranks that are played on the less-fortunate, and thankfully the actors suit depicting thirteen-year-olds much better than they acted out small children. Lewis and Zamit particularly stand out as Spencer and Moon, with Lewis convincingly playing a reckless intimidator who is struggling academically with issues with keeping a hamster alive, and Zamit representing a flirtatious and hilarious teenage girl who is two-timing her boyfriends. Being a similar age to the creators, the music used in this act took me back to my early teens, particularly when the group of them jokingly sing Shaggy’s ‘It Wasn’t Me’ in chorus.

By the second act the kids have well and truly grown up as they leave their childhoods behind to become 30-year-olds at a school reunion. Spencer, Katie, Simon, Archie and Moon have kept elements of their personalities from when they were kids, which is both entertaining and a little irksome. We watch as the friends have clearly grown apart, some with lingering and concealed feelings for each other from their teens, others just wanting to impress. Overall, Groan Ups did get some groans from me at the start, but as the characters grew up and the story linked itself together, it grew on me too.