Enjoyable once it gets going, but somehow falls flat

What do you get if you combine The Mousetrap, The Play That Goes Wrong and Oklahoma!? A musical whodunnit comedy. Well, at least that’s the aim of this show from John Kander, Fred Ebb and Rupert Holmes.

It’s the opening night of Robbin Hood, but the leading lady is causing drama by her lack of talent. But as the cast take their bow, she falls flat (on her face - dead). When Lieutenant Cioffi (Jason Manford) turns up we discover that she’s been murdered. As the show continues there are more shocks - not least that Manford is a very talented performer - including more bodies and Cioffi’s penchant for musical theatre.

It’s a slow starter with a lot of scene-setting and a lot of the show within the show is horrific. Some of the main songs could well go on to be classics (particularly enjoyable were Show People; Thataway; I Miss The Music) but there do seem to be similarities to other musicals (The Woman’s Dead sounds a lot like a song from Wicked).

The overall story is quite predictable, with a script that is unnecessarily complex and isn’t particularly engaging or gripping. Yet there are some hilarious lines, especially for those in the stagey world. Most of these come from Director Christopher Belling (Samuel Holmes) who is excellent. Carley Stenson, Rebecca Lock and Andy Coxon are also fantastic in their roles; in fact, the acting from the whole cast is superb. 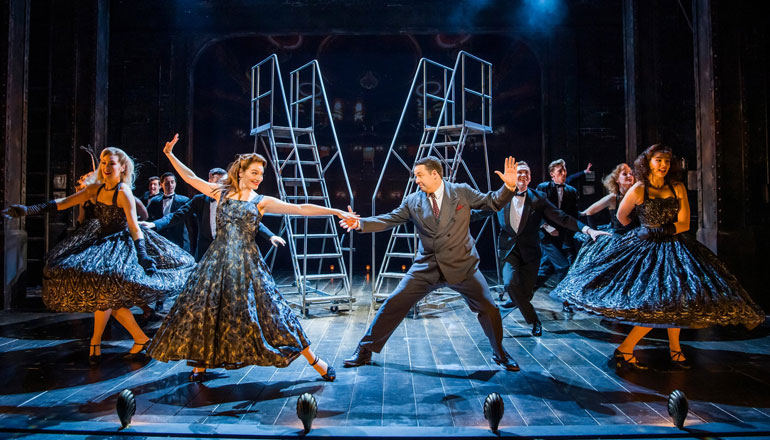 The set and costumes (designed by David Woodhead and Gabriella Slade) are quite impressive, although more time seems to have been given to the staging of Robbin Hood. That said, the contrast of Tim Mitchell’s lighting for the two shows works really well and lends itself to the atmosphere.

Curtains has a lot of the ingredients for a good musical, but it just doesn’t quite work. It’s enjoyable once it gets going (Act II is much stronger), but somehow still falls flat.