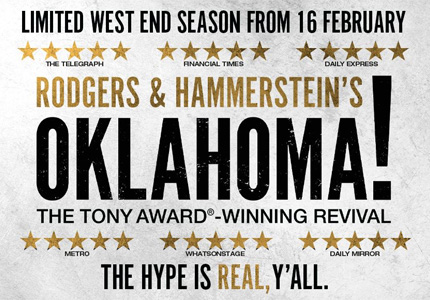 Rodgers & Hammerstein’s defining American musical is boldly reimagined for the 21st century in Daniel Fish’s Tony Award-winning production. The classic story of frontier life and the relationship between tight-knit communities and outsiders shook up the musical theatre playbook, and now gets a sexy, provocative and probing revival that you don’t want to miss. Fresh from sold-out, critically-acclaimed seasons on Broadway and at the Young Vic, Oklahoma! transfers to the West End’s Wyndham’s Theatre for a strictly limited season in 2023.
Read more
FIND TICKETS
Booking from 16 February 2023 until 2 September 2023

The Wyndham’s Theatre Box office is open Monday to Saturday from 10am – 7.45pm (15 minutes after the show starts.) Tickets can be arranged for collection at the box office and may be picked up from 45 minutes before the performance is set to begin. On collection you will need to present your booking reference and the card on which the booking was made. Parties can also leave tickets at the box office for late patrons. Visit the official website

Wyndham’s Theatre was originally designed by W.G.R. Sprague and was managed by actor Charles Wyndham, officially opening in 1899 with a performance of T. W. Robertson’s David Garrick. The venue continued to host dramas, including Mrs Dane’s Defence (1900) and Little Mary (1903).

Throughout the First World War, the theatre remained highly active, showing productions such as Raffles (1914), Dear Brutus (1917) and The Choice (1919). Following this, a successful production of Mademoiselle (1936) played, directed by Noel Coward. In 1939 the theatre was forced to close for the second outbreak of war.

2006-2009 saw a quick turnover of shows, including Honour, starring Diana Rigg, Sunday in the Park with George, with Jenna Russell, A Voyage Round My Father, starring Derek Jacobi, The History Boys, The Letter, Shadowlands, a revival of The History Boys and The Shawshank Redemption.

J B Priestley’s An Inspector Calls came to the theatre in 2009, followed by the transfer of Avenue Q (2010), Clybourne Park (2011), Much Ado About Nothing (2011), starring David Tennant and Catherine Tate, Driving Miss Daisy (2011), starring James Earl Jones and Vanessa Redgrave and two Rat Pack shows.

David Tennant took to the stage in 2017 to star in Patrick Marber’s Don Juan in Soho, followed by Lady Day at Emerson’s Bar & Grill, starring Audra McDonald. 2017 rounds off with Anne-Marie Duff and Kenneth Cranham in Simon Stephens' Heisenberg: The Uncertainty Principle.

2018 began with a Bristol Old Vic transfer of Long Day's Journey Into Night, starring Jeremy Irons and Lesley Manville. Further productions in the year included a revival of Red, starring Alfred Molina, from the Michael Grandage Company and The Height of the Storm, with Jonathan Pryce and Dame Eileen Atkins. The year rounds off with a stint from comedian Bill Bailey in his latest show Larks in Transit.

Queen of comedy Catherine Tate brought her show to Wyndham's for a short run at the beginning of 2019. Theatre Royal Bath transfer of Arthur Miller's The Price (starring David Suchet) played from February. May marked the West End debut of Hollywood and Broadway actor Matthew Broderick, who starred in Kenneth Lonergan's The Starry Messenger. Elizabeth McGovern also starred.

For thirty performances only, Phoebe Waller-Bridge starred in her hit show Fleabag for the final time. This was followed by a week-long run of The Life I Lead starring Miles Jupp.

In the autumn, brand new comedy The Man in the White Suit played at the theatre. Adapted by Sean Foley from the 1951 film of the same name, the show starred Stephen Mangan and Kara Tointon.

Tom Stoppard's latest play, Leopoldstadt opened at the beginning of 2020, featuring a huge multi-generational cast. In March 2020, the theatre closed due to the spread of COVID-19 and a planned production of Life of Pi was postponed until 2021.

The Wyndham's Theatre reopened in 2021 with the return of Stoppard's Leopoldstadt, followed by Life of Pi in the summer, until January 2023.

In February 2023, director Daniel Fish's acclaimed, Tony Award-winning production of Oklahoma! will transfer from the Young Vic to Wyndham's Theatre.