The Man in the White Suit review - October 2019

Barely a minute goes past without laughter

It’s a bit of a peculiar subject matter – a selfless scientist develops an indestructible fabric that repels dirt in order to help humanity, whilst big business tries to suppress it. Yet The Man in the White Suit is strangely relatable and insightful. Based on the iconic 1951 movie of the same name, it has a timeless relevance about it, even if at first you would expect a play about the 1950s Lancashire textiles industry to appear dated for today’s audiences.

The world premiere of The Man in the White Suit has been adapted and directed by Sean Foley, with set designs by Michael Taylor and choreography by Lizzie Gee. It stars Stephen Mangan as chemist and inventor Sidney Stratton, alongside Kara Tointon as mill owner’s daughter Daphne. 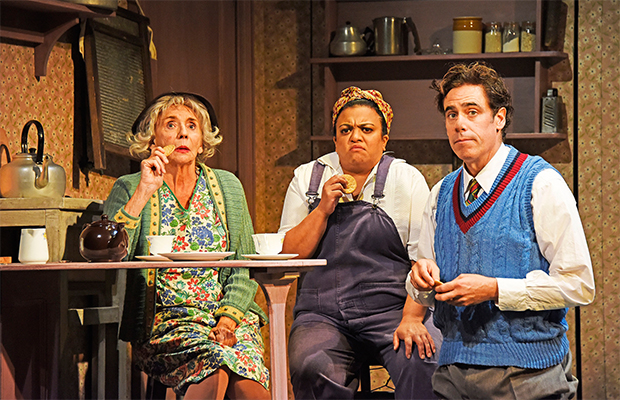 Stratton is the good-natured hero who is trying as hard as he can to develop a new and innovative fabric that never wears out or gets dirty, but he keeps blowing stuff up and getting the sack. When his formula is completed and he finalises the pristine white suit, manufactures and trade unions become threatened as they see the invention as a danger to the textile industry. Only Daphne, the daughter of mill owner Birnley (Richard Cordery), offers to help Stratton as he tries to fight against the powers that be.

There’s slapstick involving trousers being blown off and punches being thrown, hilarious puppetry when the scientist is chased at night by a pitchfork-carrying mob, and awkward dancing in a locked bedroom. There is also a Brexit joke –  we can’t seem to get away from the topic – plus comments about how electric cars were invented in the 1800s only to be suppressed by big oil companies. Because “who would believe that the oil companies are corrupt?!” Even though much of the story holds serious undertones, barely a minute goes past without laughter erupting from the sharp jokes in the script.

With a wistful 1950s setting and new music in a rockabilly and skiffle style written by Noah and the Whale frontman Charlie Fink and performed by a flawless band, The Man in the White Suit retains a charming nostalgia without forgoing its relevance. It’s funny, entertaining, bizarrely poignant at times and the intermittent music is a joy to listen to. If you want to laugh along whilst delving into an eccentric and witty plot, then The Man in the White Suit won’t disappoint.