“In the hands of a very capable cast, Miller’s character studies are gorgeously showcased.”

In The Price, memories hang dusty and thick - and as hard to shift - as the stockpiled furniture in the neglected apartment. Arthur Miller's verbose script pokes into the crevices and unearths each one. Thanks to a stellar cast, patient direction and staggering set design, Jonathan Church’s production manages to keep pace despite the loquaciousness of its characters.

Two estranged brothers meet in their parents’ old apartment, years after the Great Depression and a decision which set them on separate paths. They struggle to put a price on the hardships they've endured, each certain they are owed but unsure how the balance can ever be paid. Only Gregory Solomon, the second-hand furniture dealer, is comfortable putting a price on what he sees.

In the hands of a very capable cast, Miller’s character studies are gorgeously showcased. Policeman Victor, a pragmatic Brendan Coyle, is weighted with weary acceptance. His wife Esther, resentful of her lot in life, is artfully played with childish petulance by Sara Stewart. David Suchet draws a limitless well of humour from Gregory Solomon, with every mannerism, nuance of accent and limping gait perfectly observed. Adrian Lukis’ Walter is entitled, over-breezy and the perfect foil to brother Victor’s sturdiness. Some of the best moments see Esther and Walter orbit Victor with their hysterical optimism and cooperative make-believe as the no-nonsense cop stands his ground. As the secrets of the evening are uncovered, the frank emotion with which Coyle imbues Victor is heart-breaking. 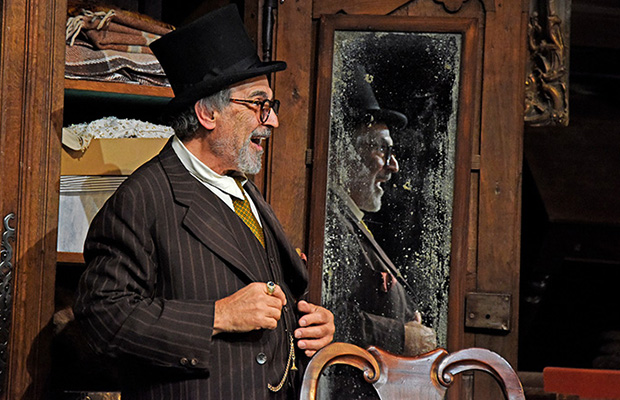 Simon Higlett’s set pits the characters below a great tumult of furniture that looks frozen mid-cascade above them. Here and there a treasure stands: ornately carved table legs and a full-size harp. It’s rather spectacular.

Jonathan Church’s direction isn’t afraid to let a moment linger, as when Victor wanders around the apartment, taking in memories. The second act threatens to teeter into longueur thanks to the dense dialogue between the brothers, but effective use of the wooden jungle of a set maintains the intrigue.

As Miller's plays go, The Price doesn't have the complex story line of All My Sons or the explosive drama of A View from the Bridge. The dialogue is dense and shared between a small cast. But thanks to fully rounded character studies and direction that lets every loaded moment breathe, this production manages to remain engrossing throughout. A thoughtful retelling of Miller’s essential themes of family, duty, work and the blight of the Great Depression: it’s priceless.