Is Tina the Musical 'Simply the Best?'

Tina is the epic biopic show about Tina Turner, charting the highs and lows of her rise to fame and her battle to stay in the spotlight featuring Tina Turner’s biggest hits. Unlike many shows of its kind it doesn’t shy away from hard-hitting issues and the audience learn about Tina’s absent mother, her abusive relationship with husband Ike Turner, and her attempted suicide.

Tina the Musical is cleverly written and rather than feeling like the songs are shoehorned in they all feel natural and help the show flow. A lot of them are performed in context, i.e. when Tina was performing or recording those numbers herself but even those that were used in a typical musical theatre context felt like they fitted perfectly into that scene. This combined with the, often hard hitting, story line had me engrossed throughout.

Act 1 focused on Tina’s childhood and her relationship with Ike whereas Act 2 focuses on her life after Ike and trying to stay at the top of the business. I really enjoyed the grit of Act 1 however at times Act 2 could feel slightly repetitive as the audience repeatedly heard how hard Tina was trying to make it big and struggling to make ends meet. 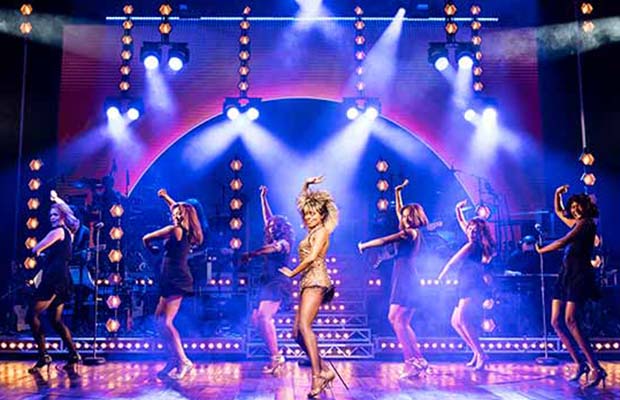 The set is very well thought out. It appears deceptively simple but when reflecting on all the various scene changes that take place, everywhere from Natbush where young Tina perches on a tree, to a hospital room and a dressing room to many concert stages it is anything but simple. It is therefore testament to the set designer (Mark Thompson) that you are transported with Tina in an instant to all these locations throughout her life, barely noticing the transitions. My favourite moments throughout the show however were the moments where the stage was virtually bare, Tina was centre stage and the rest of the cast circled her on the revolve. It was these moments where the stripped back setting let the emotion of the show really speak.

Tina: The Tina Turner Musical is about a huge star with a huge voice but luckily the casting directors (Pippa Allion CDG) of this show found their own star in Adrienne Warren. In the show they describe Tina as spitting fire when she sings, and Warren certainly does that. If you close your eyes and simply listen to Warren you feel as if you could be listening to Tina herself. Warren however isn’t just a stunning vocalist; she captures Tina’s innocence at her young age as well as her anguish she goes through with Ike perfectly.

The rest of the cast are also very strong. Baker Mukasa cut a nasty, manipulative figure as Ike Turner, so much so that he got an appreciative boo at the curtain call. Gerard McCarthy on the other hand came across as utterly adorable as Tina’s second husband Erwin Bach. The ensemble seemed bursting with energy performing hugely energetic dance routines as Tina’s backup dancers, reminiscent of some of Tina’s iconic moves.

Is Tina: The Tina Turner Musical simply the best musical in the West End? Well, it may not quite be the best but it is rather good and Adrienne Warren needs to be seen to be believed in this role.