A lone skyscraper looms over an urban wasteland where Falco, his wife and daughter live in nervous exile. In the streets of this dystopian Manhattan, a gang of eternally 18-year-old mutants rule the land with rock music, motorbikes and uninhibited sexuality. Raven, the newly adult only child of the Falcos, writhes with longing for the gang’s leader, Strat. Part Lost Boys/Peter Pan and part Romeo and Juliet, Jim Steinman’s sweeping story of teenage rebellion mashes up 1980's teen movie tropes with his monumental songs, in a lengthy spectacle that swings from the sublime to the ridiculous.

Director Jay Scheib uses an extraordinary array of stage effects, from flame throwers to an exploding motorbike to more common projections and live video feeds. Though Jim Steinman’s book relies on terrible, teen-angst poetry to cobble together a story that’s ridden with tropes, Scheib cannot be accused of a lack of vision. The production is a feast for the senses, albeit lacking characterisation or narrative depth. 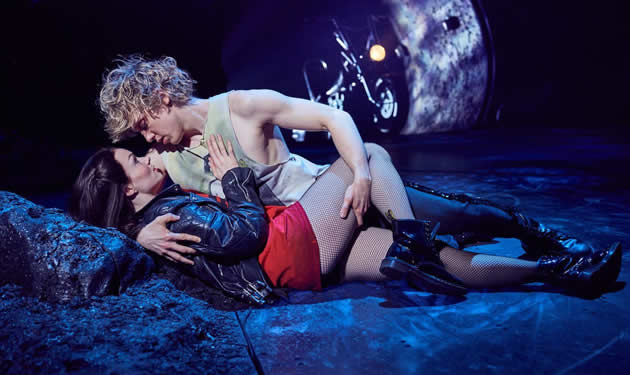 The acting is universally poor, but the cast are phenomenal singers. Christina Bennington as sulky, loved-up Raven gives stunning renditions of some Steinman classics. Rob Fowler and Sharon Sexton as Raven’s very out-of-love parents also have some great moments - "Paradise by the Dashboard Lights" is sung better than the original.

Soaked with 80's rock aesthetic, the story’s themes are reflective of the time and painfully dated. Women are disrespected by their men, but keep going back. The poor, little rich girl can’t cope with slumming it. Money can’t buy happiness. The kids’ group dynamics are identical to those of every other film set in a high school, and the eternal life factor has little impact – it’s just a rip-off of other concepts and unsuccessfully tries to add a supernatural element.

Other than the effects and the songs, there’s not a lot else going for this monstrosity of a jukebox musical. It’s definitely one for devoted Meat Loaf and Jim Steinman fans, as the dramaturgy is laughably clumsy and sprawling. It’s not worth two and half hours of stage time, and the thin story is largely predictable. It may have been edgy in the 80's, but now it’s all rather tired.