The fifth selection of Pinter plays, The Room / Victoria Station / Family Voices has arrived at the theatre named after the renowned playwright and begins with his very first play.

Premiering back in 1957, The Room offers an insight into the minds of those living during a bleak post-war era, where fear and xenophobia ran rife and being suspicious of differences was apparently the norm. Jane Horrocks shines in her role as the drab and fidgety housewife who repeats herself in an uneasy manner and fusses about her silently peeved husband (Rupert Graves). With his frustrations slowly building up inside him, soon to explode in an unsettling way, the supporting characters (Colin McFarlane, Emma Naomi and Nicholas Woodeson) thankfully provide an occasional element of comic relief in this dark play. It starts off quite flat and feels rather dull to begin with, but The Room takes a distressing turn and showcases Pinter’s early style with its comically familiar yet disturbing undertones. 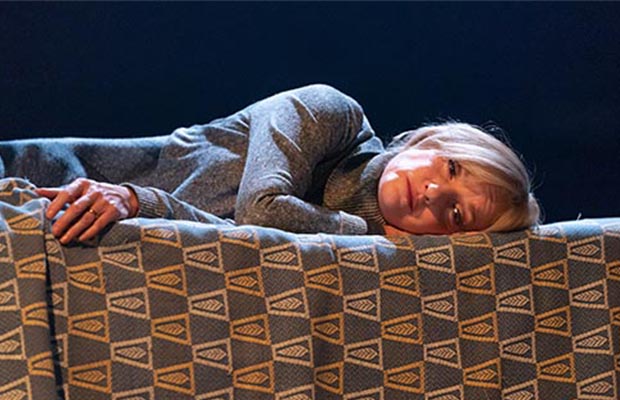 Next up is Victoria Station which sees Graves joined onstage by Colin McFarlane in this short and snappy yet hilarious sketch. Consisting of radio dialogue between a minicab dispatcher and a driver, Victoria Station showcases the development in style in Pinter’s work as it was written over twenty years after The Room, yet it similarly takes a menacing turn towards the end. The skit is effective and acted superbly, and its simplicity allows for the writing to shine, making it the most enjoyable of the three performances of the night.

Family Voices finishes off the collection of plays in Pinter 5. Originally a radio play, this reflective piece is brought to life on the Pinter stage with stunning performances from Luke Thallon and Jane Horrocks. Exposing the story between a mother, son and a dead husband and father in a series of letters spoken in interweaving monologues, Family Voices dramatically shows the isolation we can feel when trying to communicate.

Pinter 5 features excellent performances from the cast in these three different yet comparable plays. The Room feels rather dated compared to the latter two, although some of its themes seem rather familiar in today’s climate, but Victoria Station and Family Voices feel fresh and allow the audience to delve into the intricate world of Harold Pinter.